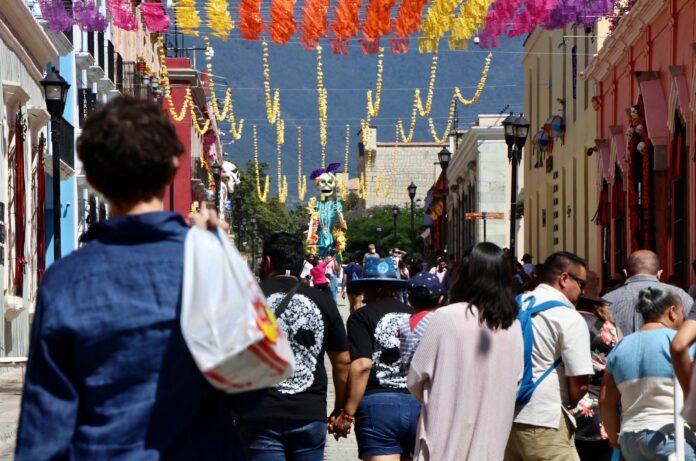 In advance, an exhortation was issued to the 570 municipalities to comply with the prevention measures and avoid a rebound in covid.

The State Board of Health of the Ministry of Health in Oaxaca announced that they will apply sanctions against municipalities that disrespected prevention and containment measures during the Day of the Dead festivities.

The Secretary of Health, Juan Carlos Marquez Heine, said that in advance an exhortation was issued to the 570 municipalities to comply with the adjustments to the Health Law regarding  covid-19.

He specified that in several communities the correct use of the mask was not fully respected, the healthy distance and the events attended were not restricted, for which the corresponding sanctions were applied.

Among the municipalities where measures will be exercised is the municipality of Soledad Etla, where the municipal authority allowed the “Death”, a tradition in the celebrations of the faithful departed.

In the municipality of Nazareno they ignored the preventive measures in the entrances to the pantheons.

In the case of Oaxaca de Juárez, the city council reported that it monitored the correct use of face masks and mitigation measures in public spaces.

Juan Carlos Marquez Heine, reported an upturn in covid-19 infections, where there are already 5 saturated hospitals, in addition to the fact that in the last 24 hours 308 active cases of this disease were reported in 65 municipalities

204 cases of people with active respiratory disease were registered, which means that they can infect many more.“This Thursday, five hospitals are at 100% occupancy, and in the last 24 hours the admission of 13 people to the hospital network was notified for a total of 130 hospitalized patients and 284 beds are available,” the official explained.

Over 65,000 national and foreign tourists came to the three main tourist destinations of the entity.

They foresee sanctions for the municipalities that did not follow the anticovid sanitary protocol.

According to the figures of the Government of Oaxaca, an economic spill of 220 million pesos was reached in the three main destinations of the entity during the holiday bridge of the Day of the Dead celebration.

This period, which ran from October 29 to November 1, the main tourist destinations: the city of Oaxaca, Bahías de Huatulco, and Puerto Escondido, received a total of 65,366 national and international tourists.

Inhabitants and tourists enjoyed the beaches, gastronomy, markets, and the atmosphere of celebration that is lived in every corner of the entity during this time.

The City of Oaxaca had the maximum allowed occupancy capacity, received 39,657 national and foreign tourists, which reached 80% of average hotel occupancy and an economic benefit of 97 million pesos.

Similarly, in Bahías de Huatulco, where the occupancy was 57.79%, there was an economic spill of 95 million pesos generated by the arrival of 15,800 visitors.

In the case of Puerto Escondido, the arrival of 9,909 national and foreign tourists was registered, which achieved an economic spill of 27 million pesos and 45.80% of hotel occupancy.

Compared to the numbers reached in the three destinations during the same period of 2020, this 2021 the occupation was exceeded with the arrival of 43,930 more tourists and an additional economic spill of 143 million pesos.

MUNICIPALITIES THAT FAILED SANITARY MEASURES WILL BE PUNISHED

On the other hand, the State Health Council (CSS) announced that it will apply sanctions against municipalities that disrespected prevention and containment measures during the season of deaths.

There is also the municipality of Nazareno where prevention measures were not taken into account in the income of the cemeteries.

In the case of Oaxaca de Juárez, the measures that could be applied are analyzed, because the city council reported that it took care of the use of face masks and mitigation measures in public spaces.