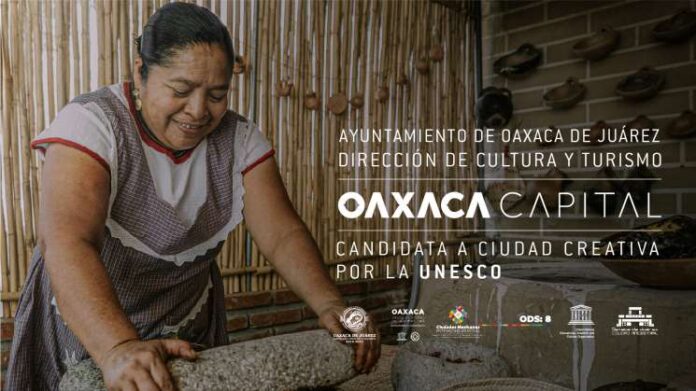 The proposal included the Gastronomic Center of Oaxaca, as well as the project of the Mexican Entomophagic Center.

The Oaxaca de Juárez City Council announced that the United Nations Educational, Scientific and Cultural Organization ( UNESCO ) once again considers the state capital as a candidate to join the Network of Creative Cities.

This after the municipality decided to apply to the city, as in 2019, under the category of Gastronomy and with the endorsement of various national institutions, such as the Mexican National Commission for Cooperation with UNESCO (Conalmex), the National Chamber of the Restaurant and Seasoned Food Industry ( Canirac ) and the Conservatory of Mexican Gastronomic Culture.

The Director of Culture and Tourism, Gloria Martínez López, explained that the file of the candidacy of Oaxaca de Juárez was consulted with representatives of the public and private sectors, civil society, traditional cooks and chefs, in order to develop innovative initiatives in the gastronomic theme.

One of the initiatives presented in the file is the Gastronomic Center of Oaxaca (CGO), whose purpose is to preserve, promote, and develop the gastronomic and food sectors as keys to the economy due to their capacity to generate jobs and increase activity economical.

Another project is the Centro Integral Entomophaágico Mexicano (CIEM), aimed at creating spaces for research, rescue, innovation and dissemination of entomophagous gastronomic culture, to develop food alternatives, promote and revalue this culinary tradition.

There is also the Forum The Traditional Kitchens of America: visualized through its actors (FCTA), an activity in which knowledge and experiences will be shared to generate links between traditional cooks worldwide and to preserve and rescue traditional techniques.

Martínez López pointed out that the file is still under review by UNESCO and is awaiting the final ruling, which will be given in November.

“The Creative Cities Network was launched by UNESCO in October 2004 with the aim of connecting creative cities in such a way that they can share knowledge, know-how, experience, managerial skills and technology,” said the City Council in a statement. .

This network includes 246 cities around the world that share the same creative spirit, the dissemination and exchange of knowledge and knowledge that help society, in general, to increase its economy, working on local issues with global impacts.

The network comprises seven themes: Cinema, Gastronomy, Literature, Music, Design, Digital Arts and Crafts and Popular Art; and it is the cities themselves that choose to associate with one of them based on their preferences, strengths, energy and talent.

“Joining this network allows cities to reinforce the creation, production, distribution and dissemination of cultural activities, goods and services; develop poles of creativity and innovation and increase the opportunities available to professional creators in the cultural sector and improve access and participation in cultural life, particularly for the benefit of disadvantaged groups and vulnerable people ”, concluded the municipality.