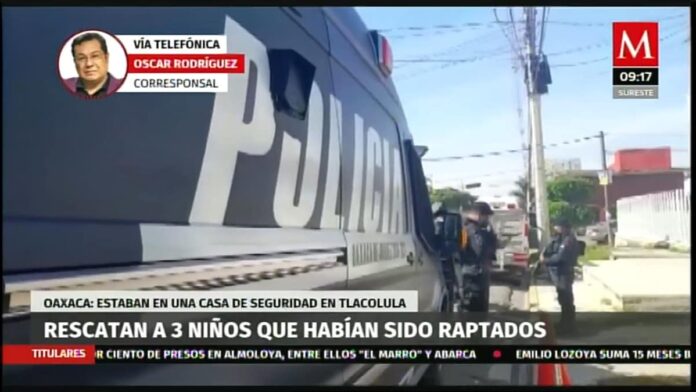 Oaxaca.- State security forces and elements of the State Investigations Agency (AEI), of the General Prosecutor’s Office of the State of Oaxaca, managed to rescue three minors who had been kidnapped and who were in a safe house located in the vicinity of the municipality of Santa Lucía del Camino.

The Attorney General, Arturo Peimbert Calvo, reported that after the complaint about the disappearance of the minors, an investigation folder was integrated, where an extensive investigation was carried out to establish the whereabouts of the infants.

Hence, a search warrant was requested from a judge, which was granted and the operation was activated to rescue the minors.

When the police arrived at the identified site, they managed to arrest two people as alleged perpetrators, who had already been presented to a Control Prosecutor for the crimes of illegal deprivation of liberty in the form of kidnapping and human trafficking.

The five minors had been kidnapped in the city of Oaxaca, in Santa Lucía del Camino, and in Tlacolula de Matamoros. It was reported that they had been hooked through video games and social media groups, with the promise of being hired at a company located in the northern part of the country.

The parents of the young people from Tlacolula de Matamoros uploaded photographs to social networks asking for help to demand their location, and it was with the help of cell phones that they were first located near the ADO, then in the Cerro del Fortín, and later in the Railroad avenue.

The minors were handed over to their relatives in good condition, while the investigation continues to clarify the facts.