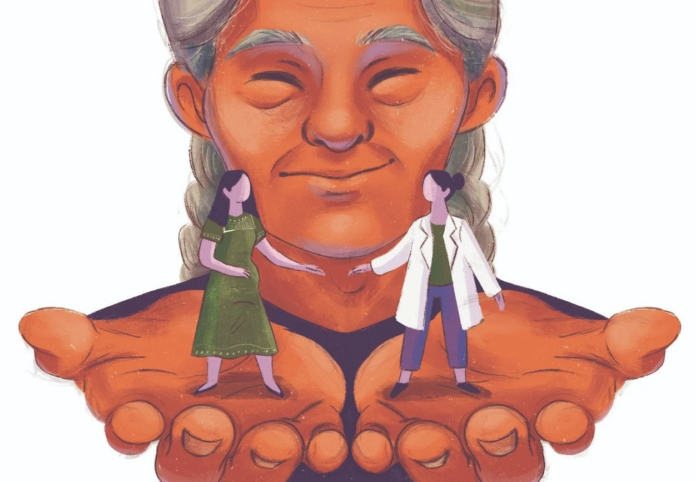 Women from indigenous communities in Mexico use midwifery knowledge as a tool not only during pregnancy, childbirth, and the puerperium, but also for abortion

Oaxaca de Juárez.- For decades, women from indigenous communities in Mexico, especially in areas where access to health is limited, have made use of midwifery knowledge as a tool not only during pregnancy, childbirth and the puerperium but also for abortion.

The Federal Ministry of Health (Ssa) states that midwifery is a community health agent that uses traditional indigenous medicine and is recognized by the World Health Organization (WHO). Aware of this, feminist groups and organizations that work in favor of the recognition of women’s sexual and reproductive rights, recognize midwifery as a tool to exercise the right to decide about their bodies.

Marie Stopes, a foundation that was established in Chiapas in 1999, after the Zapatista uprising, made visible the deficiencies in access to health in that state. The organization provides sexual and reproductive health services to the population, migrants, and people in transit.

After the decriminalization of abortion in 2008 in Mexico City, the foundation opened seven clinics strategically located to guarantee the right of women to decide, without having to travel for hours to hospitals with this service.

In Oaxaca, the foundation has been present for a year and a half, when it opened a clinic for access to safe abortion. In addition, it promotes a  sexual education program for everyone, with the purpose of influencing youth, regarding issues such as pregnancy, sexually transmitted infections and safe abortion.

As part of these programs is that of midwives, through which it seeks to disseminate information on sexual and reproductive health, accompaniment is provided to midwives and health promoters, who share information in mother tongues and in indigenous communities, to the women who inhabit them.

In this regard, the coordinator of the Marie Stopes Midwives program, Bárbara Pérez Roldán, specifies that midwives can provide useful information on the options to access the termination of pregnancy.

In some communities, midwives also often recommend certain teas and herbs, through which it is possible to interrupt a pregnancy, adds Pérez Roldán.

The state of Oaxaca is one of those with the highest number of midwives, according to the Mexican Institute of Social Security (IMSS); however, there is no up-to-date record of them. Until 2019, there were 750 midwives linked to the IMSS Bienestar in the entity; this without counting those who work independently and those who do not have certification.

Only in the region of the Isthmus of Tehuantepec there was a census of 507 midwives, just two years ago.

These figures could indicate a growing number of people with the necessary knowledge to follow the decision of women regarding their body, whether to have children or to terminate a pregnancy.

“The right and the power to decide belongs to women, but what better way than to do it together. The decision is not easy (…) Many women experience their abortion alone, but it is important to learn to accompany them, ”says Bárbara Pérez.

Recently, the Marie Stopes Foundation held meetings with midwives from the Coastal and Mixe regions, who accompany women from the decision to terminate their pregnancies, until the weeks after the abortion, when they still require surveillance.

The midwives who have attended meetings with Marie Stopes have the necessary information to recommend medications endorsed by the WHO to interrupt pregnancies and take into account the technical guideline for the care of safe abortion in Mexico, released in June by the National Commission to Prevent and Eradicate Violence Against Women (Conavim).

Although abortion up to the 12th week of gestation was decriminalized since September 25, 2019, in the entity, very few women have real access to this right. According to the Oaxaca Health Services (SSO), only 49 women have agreed to legal abortion since its approval to date.

Marie Stopes believes that there is a huge underreporting of women who are not part of the official figures.

“Women abort without going to clinics, they do it at home with midwives, with medications; It is difficult to speak of figures due to the under-registration ”, he points out.

Likewise, Marie Stopes has a subsidy program that finances the right to decide of women who cannot pay for medical follow-up, while in the event of rape and unwanted adolescent pregnancy, the financing is granted 100%.

The Rosario Castellanos Group of Studies on Women (GES Mujer) states that miscarriages are the third leading cause of maternal death in Oaxaca. This cause is the fourth nationwide, however, in the state the figure is accentuated by the shortcomings faced by women, especially in the communities.

The organization adds that, if abortion could be decriminalized, it is thanks to the efforts of the groups that fought for that right.

The Supreme Court of Justice of the Nation (SCJN) ruled on September 7 that it is unconstitutional for Mexican women to be imprisoned for deciding on their bodies.
“We are not going to be criminalized for having an abortion. It is a legal resource that can be protected where it is not legal, ”adds GES Mujer.