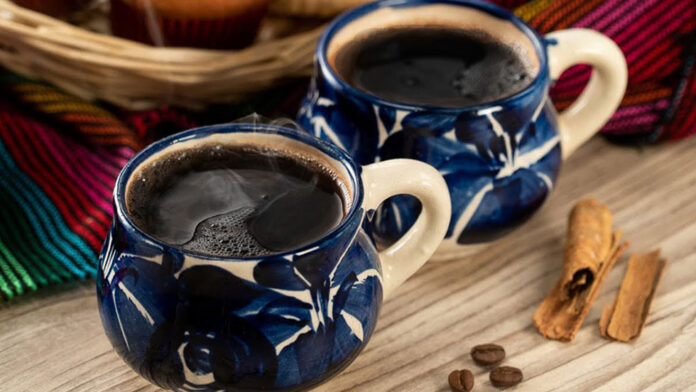 Cafe de olla is a historic Mexican coffee-based drink. It is prepared by combining spices and coffee in a clay pot. However, while many enjoy it for its unique blend of flavors, it was actually invented a few decades ago out of necessity.

The café de olla is a typical way of preparing coffee in Mexico, which consists of flavoring it with cinnamon and piloncillo (panela); sometimes also cloves, dark chocolate, star anise, Tabasco pepper, and orange or lemon peel.

It is traditionally cooked in a clay pot, hence its name, and it is served in spherical cups that are also made of clay. Crockery or earthenware is very traditional in central Mexico and can be found in markets and supermarkets, although they can contain lead and be harmful to health.

It is usually consumed a lot in rural areas in the center and south of the country, although it is also easy to find in large cities. It is taken all year round, mainly in winter.

In Oaxaca it is known as café con panela.

Coffee arrived in Mexico from Africa in the 18th century, via the port of Veracruz. It is believed that café de olla arose during the Mexican Revolution (1910-1917), when the Adelitas, revolutionary female soldiers, mixed coffee with cinnamon and brown sugar.4 Later, other spices were added, such as cloves, anise, chocolate …

It is wrongly said that it is of pre-Hispanic origin and that Moctezuma Xocoyotzin drank it, which is impossible since the coffee arrived in America after contact. What Moctezuma was actually drinking was an infusion of honey, corn, and cocoa, which according to the Mexican Association of Specialty Cafes and Cafeterias “was very similar to the mixture that today is known as cafe de olla.”

In Mexico, rural coffee growers have grown coffee in households for centuries. Historically, the family matriarch would have overseen the entire process, from planting to harvest and sale. Today, this still happens across the country; and these producer families operate with little or no modern technology.

Many go a step further, roasting and then grinding their coffee with a stone grinding tool, known as a metate, or a corn grinder. The coffee is then prepared and consumed in one of the traditional ways, for example, café de olla.

However, the number of Mexicans who still consume coffee in a traditional way is decreasing. More and more consumers are moving away from coffee drinking traditions to focus on aspects such as coffee origin, variety and tasting score, which is indicative of a third wave and specialty coffee culture.

This drink could start to disappear as the number of people making it dwindles, unless coffee shops continue to offer it. But just because the drink is traditional doesn’t mean it has to be served in a particular way.

It is for this reason, that fostering the new generations, the love for our roots and traditions is fundamental, to preserve the history of our peoples. In addition to exhorting coffee shop owners, they could balance tradition with specialty coffee in order to meet the needs of both audiences. Balancing the new with the old could attract a wider variety of customers and educate both traditional and modern coffee consumers.