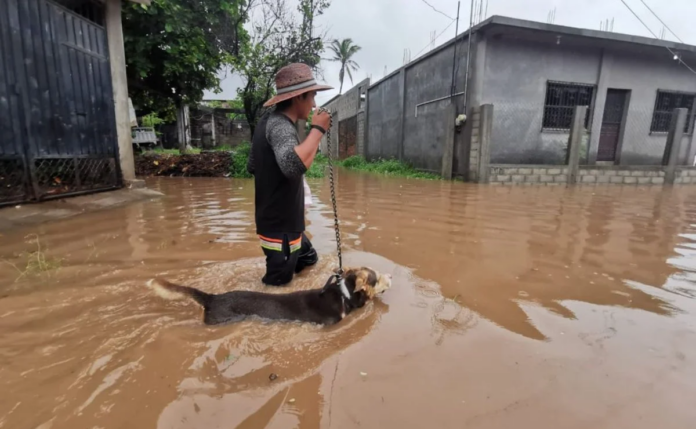 Due to the overflow of the Los Perros River In the upper part of the Isthmus, 33 communities located in the Sierra Mixe-Zapoteca were cut off

The torrential rains that have hit Oaxaca in recent days as a result of high and low-pressure systems located on the coasts of the Pacific and the Gulf of Mexico, which interact with Tropical Wave number 3, have caused the overflowing rivers and streams, at least 15 colonies flooded, some thirty isolated populations and hundreds of families affected in the region of the Isthmus of Tehuantepec, as well as two fatalities in the Central Valleys.

Last Wednesday morning, the northern area of ​​the Isthmus woke up with crops and flooded populations due to the overflow of the Chivaniza, Chapala, San Isidro, Malatengo rivers, as well as secondary streams, which affected municipalities such as Barrio de La Soledad, Santo Domingo Petapa and San Juan Guichicovi, according to reports from the Civil Protection authorities.

While at least 15 neighborhoods of Ciudad Ixtepec located near the Nisa Lubaa stream and five storm drains were flooded, which affected more than 300 families, reported the City Council Trustee, Noe Hernández Reyes.

According to a tour carried out by the municipal authorities, the water entered the houses in the low-lying areas; Therefore, two shelters were established, the first in the Municipal Auditorium and the other in the Niños Héroes Elementary School. A third shelter was set up in the municipality of San Blas Ayempa; In addition, the Oaxaca Public Security Secretariat (SSPO) implemented a State Plan for Assistance to the Population.

In the upper part of the Isthmus, 33 communities located in the Sierra Mixe-Zapoteca were cut off. These are 13 agencies belonging to the municipality of Guevea de Humboldt, as well as 20 towns in San Juan Cotzocón, which, due to water runoff in streams and rivers, and due to the lack of paved roads, were left without access.

Juchitán, under the water

While in Juchitán, the Los Perros River overflowed in the lower parts of the city, the Eighth, Ninth and Fifth sections of this Zapotec city, where the water levels exceeded the bridge that connects them, because of the garbage that drags the tributary from other communities.

According to the neighbors, the river had not overflowed for four years, so, aided by machinery, they tried to remove the large amounts of garbage that impede the passage of water, which until yesterday evening continued to rise at high speed.

This river is born precisely in the Sierra Mixe-Zapoteca and crosses diverse communities of the Isthmus of Tehuantepec until it empties into the Pacific Ocean.

Given the risk posed by the river, the State Coordination for Civil Protection of Oaxaca (CEPCO) launched an alert for the inhabitants of four municipalities of the Isthmus: Ciudad Ixtepec, Asunción Ixtaltepec, Juchitán de Zaragoza, and Santa María Xadani, so that the inhabitants are “Attentive and watch over the passage of the Los Perros river and its tributary currents.”

According to CEPCO, in the face of runoff from the Sierra, this tributary is above its critical scale, while the Ostuta and Espíritu Santo rivers are monitored.

According to the first tours made by the municipal authority of Juchitán, there were at least a thousand homes in three sections of Juchitán that were affected by the floods and the overflowing of the Los Perros river.

In addition, the rains caused slopes to slide on roads that go from Oaxaca City to Puerto Ángel and Puerto Escondido, as well as in El Vidrio – Juquila, in the Costa region, and Oaxaca – Talea de Castro, in the Sierra Norte. The death of two men was also confirmed due to a lightning strike in Yaxe, a municipality in the Central Valley region.

According to CEPCO, the rest of the state’s rivers are at 50% of their capacity “with a clear tendency to continue increasing due to the fact that the rainy season will continue in Oaxacan territory in the next few hours.”

According to the National Meteorological Service (SMN), torrential rains are expected for this Thursday in Oaxaca, Veracruz, Tabasco, and Chiapas that could last until Friday.

In this regard, Governor Alejandro Murat reported that Civil Protection is working to request that the situation in the Isthmus be recognized as a “natural disaster” due to the rains and thus be able to access federal resources.