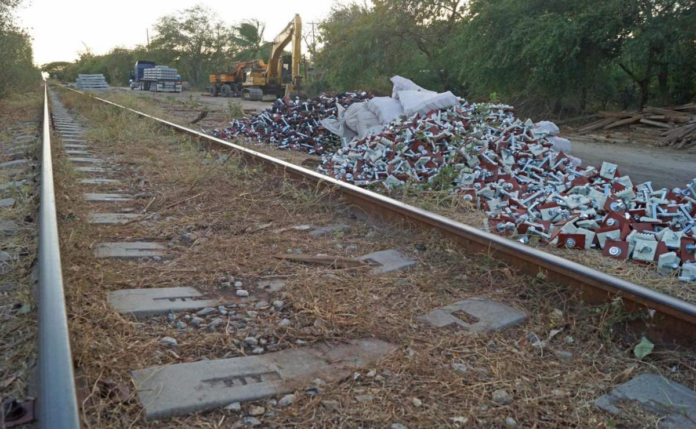 In Santa María Mixtequilla, the claim of the inhabitants is that a consultation be carried out after project personnel assured them that they would not be consulted for “not being indigenous”

Juchitán.— Although the National Institute of Indigenous Peoples ( INPI ) has formally notified in writing to the Interoceanic Corridor of the Isthmus of Tehuantepec (CIIT) that it must have the consensus of the communities where it plans to buy lands to install industrial parks or  Poles Development for Wellbeing (Podebis), in the region claims are accumulating for the organ’s attempt to avoid consulting the residents.

In the case of Santa María Mixtequilla, the claim of the Zapotec inhabitants is precisely that, that an indigenous consultation be carried out on the project after community members denounced that project personnel assured them that they would not be consulted for “not being indigenous”; While in Rincón Vaquero, which belongs to the municipality of El Barrio de La Soledad, they demand more information.

On March 31, EL UNIVERSAL announced that the INPI informed the head of the Interoceanic Corridor that only if the communities approve the Development Poles in the consultations, the federal government will be able to advance with the purchase of land, as notified in an office dated from January 14; Despite this, they tried to purchase the land without consulting Mixtequilla and Rincón Vaquero.

“We do not know how fast the government is to acquire our lands, but we want to know how much they will pay per hectare, who will finally buy them, whether they will be national or foreign entrepreneurs. We want to know what kind of industry will be installed and we also ask for guarantees so that our children and grandchildren have jobs, “says ejidatario Fleury Godínez, who assures that they are not against the project, but they do demand transparency.

On April 25, the assembly of ejidatarios was installed in this community, which on its agenda included the transfer of land rights to the ejidal president, José Gallegos, to begin negotiations with the CIIT for the purchase and sale of 349 hectares, which is required the Pole of Wellbeing.

The assembly was interrupted and the point related to the transfer was not approved, as the ejidatarios accused personnel of the Agrarian Procurator (PA) of trying to impose a maneuver to pressure them to sell their lands.

Most of the 85 ejidatarios attending, out of 155 who make up the registry where names of deceased persons still appear, chose to appoint a commission to investigate the amount per hectare offered by the CIIT, because, they point out, there is talk of 130 thousand and up to 300 thousand pesos. They also want you to find out if the purchase will be made by the government or investors.

After this decision, the PA personnel warned the ejidatarios that if they formed said commission they would not be able to continue with the negotiations, by way of pressure, according to a video held by EL UNIVERSAL.

“We want to know what type of industry is going to be installed in our community because in neighboring towns there are concerns about the possible contamination of our rivers. In the communities of El Nacedero, El Ajal, Chivaniza, El Jardinero, Los Nanches, and Paso Guayabo they are concerned that the Development Pole will contaminate the water with its waste because there is no drainage in the area ”, says farmer Hilario Toscano.

As a member of the Investigative Commission that appointed the ejidal assembly, Fleury Godínez says that they are going to request the appearance of the head of CIIT, Rafael Marín Mollinedo, in Rincón Vaquero, to clear up any doubts. “Mr. Marín asked the commissariat to go see him elsewhere. Now we want him to come. Do you want a consultation? Some yes, others no, because they want the sale to happen soon, ”he explains.

Although in Rincón Vaquero the peasants do not assume themselves as indigenous, since no one speaks Zapotec or Mixe, they do have a community organization based on their patron saint festivals and mayordomías, which places them as part of the indigenous communities of the Isthmus of Tehuantepec and therefore they are subjects that they should be consulted about the implications of the Interoceanic Corridor, like other towns, explains the head of INPI, Adelfo Regino Montes.

According to the official, since April 18, the INPI signed 3 consultation protocols with the municipal and agrarian authorities of Ciudad Ixtepec, San Blas Atempa and Santa María Mixtequilla, where the CIIT has the obligation to participate in the first phase of the consultation. which is informative and unfolds this weekend.

Regino Montes anticipates that a consultation protocol project is also being worked on in the case of the Zapotec municipality of Ixtaltepec, where the possible installation of another pole of the Interoceanic is being explored. In the case of the Rincón Vaquero community, INPI will be pending the decision made by the ejidatarios, he explains.

And he assures that nothing is done based on political will, but those consultations are mandatory and for that reason, the agency he directs coordinates with the CIIT and the regional offices of the Agrarian Prosecutor’s Office so that they adjust their actions in accordance with the law. and to international conventions. “In this project, we all have the obligation to listen to the voice of indigenous peoples,” he asserts.

This weekend, after the claims of the testers and community members for the attempt to pressure to sell their lands without prior consultation, the information phase of this process began in Mixtequilla.