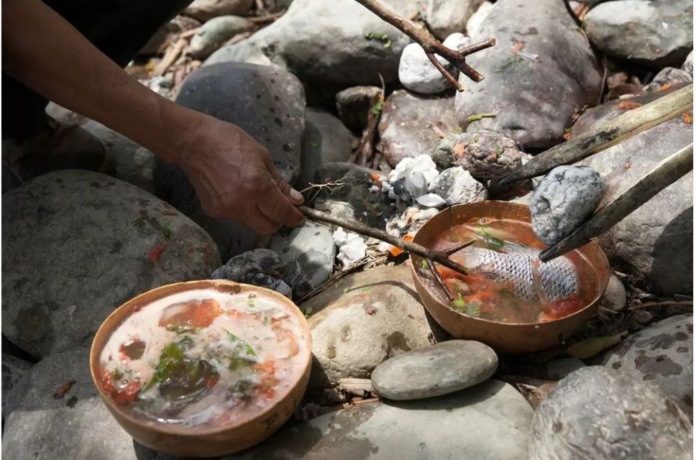 The 64th Legislature of the Oaxaca Congress declared the traditional Caldo de Piedra as an Intangible Cultural Heritage of the State of Oaxaca.

According to a statement from the Oaxacan Congress, Caldo de Piedra has its origin in the community of San Felipe Usila, Tuxtepec, Oaxaca and for the people who live in this Chinantec region, it represents their ethnic identity.

In addition, it is a symbol of coexistence, unity, peace and respect between the population and its inhabitants.

This dish consists of fish, onion, chili, tomato, coriander, epazote, and water. The ingredients are deposited in a gourd, in which red-hot stones are dropped, causing almost instantaneous cooking.

This dish, traditionally prepared by Chinantec men, encourages friendship, compadrazgo and a sense of unity.

Using an artisanal technique, the inhabitants of this community undertake the task of fishing and selecting the appropriate stones to make the traditional dish, a purely cultural and ancestral activity in the northern region of the entity.

This declaration complies with the provisions of Article 16 of the Law of Cultural Development for the State of Oaxaca, which establishes that the safeguarding, conservation, restoration, recovery, preservation, promotion and dissemination, enrichment, and research is declared of public interest. of the cultural, tangible, and intangible heritage of the State.

What are the ingredients of a stone broth?

How to prepare a Stone Soup?

Before starting the preparation, it is necessary to heat the stones on charcoal for approximately 2 hours.

For the preparation, you will need a gourd – a container made with the gourd tree – or a clay plate that withstands high temperatures.

Then place the shrimp and a piece of mojarra at the bottom of the plate, then add a slice of jalapeño pepper to each plate in addition to putting the onion and a slice of tomato cut in half.

In the molcajete, a tomato is crushed until there is a thick paste, then a little is added to each dish.

Then salt to taste and add coriander leaves, as well as fresh epazote.

Then water is placed up to three-quarters of the plate. At the end, with the help of tweezers, submerge three burning stones in the broth and cook for 3 to 4 minutes.