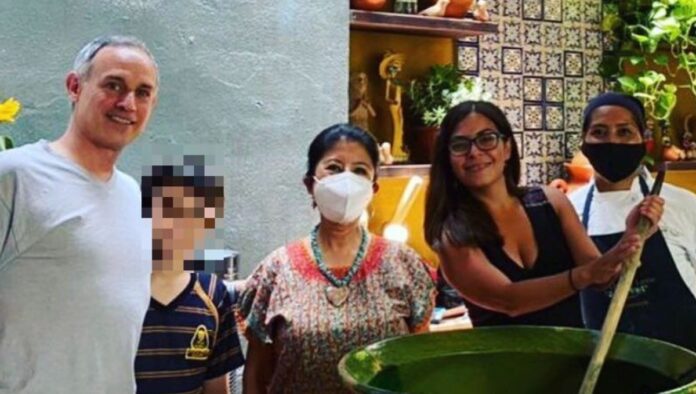 Once again, Undersecretary Hugo López-Gatell, the main promoter of measures against the covid-19 pandemic, was caught visiting Oaxaca, this time in a restaurant.

Hugo López-Gatell, undersecretary for Prevention and Health Promotion of the federal government and main spokesperson for the strategy against the covid-19 pandemic, was again captured in Oaxaca without respecting the healthy distance and without wearing a mask.

This Saturday, May 1, the federal official was at the restaurant “Las quince Letras, located in the downtown area of ​​the capital of Oaxaca, where he took photos with the well-known cook Celia Florian. In the images, it can be seen that he, the woman and a minor who accompany him do not wear face masks.

Just last Wednesday, April 28, López-Gatell attended the morning conference of President López Obrador without a mask despite acknowledging that he had “a common cold” and that, in his own words, “generally lasts from eight to 10 days.” .

Despite his constant calls to respect health measures to prevent the spread of the SARS-CoV-2 coronavirus, López-Gatell has been controversial by not following his own guidelines, since at the end of December 2020 he was caught in a restaurant on Zipolite beach, also in Oaxaca, and last March he was seen walking in the streets of the Condesa neighborhood, in Mexico City, despite being infected with covid-19. In both cases, he was not wearing a mask either.

The official himself was already infected with coronavirus, which was worth being out of the public eye for 19 days and that, as mentioned, he had to be treated with oxygen to help him preventively.

“I feel fine, I have a common cold, not everything is Covid-19,” said the Undersecretary of Health.

“I have evidence that I generated antibodies after I got sick with SARS CoV-2,” he added.

Oaxaca is in a yellow epidemiological traffic light (that is, it has a medium risk of contagion), and until this Sunday it has 46 thousand 007 confirmed infections and 3 thousand 488 deaths, according to data from the federal Ministry of Health.

This visit to Oaxaca is the second time that López-Gatell has vacationed in the state in recent months, after he was captured at the end of the year at the restaurant “El Alquimista”, on the Zipolite nudist beach , belonging to the municipality from Pochutla, in the Costa region.

Those López-Gatell holidays caused controversy, but above all because Mexico City and Oaxaca were going through a peak in coronavirus infections and hospitalizations, in what has been the most serious rebound in cases to hit the country.

At that time, the images of López-Gatell on the beach, surrounded by people and without a mask, in addition to him answering a phone call when getting off the plane and using the mask incorrectly, caused outrage and criticism.

As a spokesperson for the strategy against the pandemic, López-Gatell managed to position the phrase “Stay at home”, as well as others where he reminded the population that it was not time to vacation but to take shelter to avoid infections.

Days before being captured in Oaxaca for the first time, he asked the population not to go on vacation so as not to shoot the cases.

López-Gatell excused himself on that occasion by assuring that in the current electoral context there are those who want to “take advantage, create demons or enemies to position themselves” and said that his acting in the restaurant where he was caught without a mask was taken out of context, since then on several occasions he has been caught without following the sanitary measures that he himself promotes.

Just on March 10, images of the undersecretary of health were released walking in the Condesa neighborhood of Mexico City, after he himself explained that the Covid test had just been done and he still had a load sufficient to be considered as “ contagious ”and that he still did not have an epidemiological discharge.

On this occasion, on his second visit to Oaxaca, the official posed smiling with his companions and took photos with the restaurant staff.

Currently Oaxaca is officially in yellow in the epidemiological traffic light of Covid-19 risk of the federal government, the above after going back from the green in which it was two weeks, before a rebound in infections; for a few days the entity has reported a decrease in hospital occupancy.