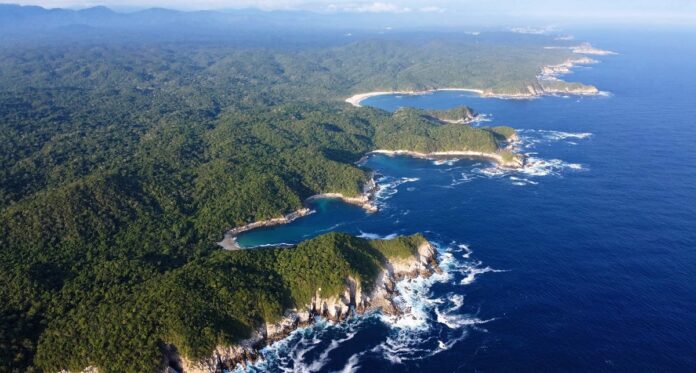 On May 26, 1984, a presidential resolution was issued containing the restitution of lands in favor of the community of Santa María Huatulco.

On May 26, 1984, the presidential resolution was issued containing the restitution of lands in favor of the community of Santa María Huatulco, in its recitals a grant was invoked in favor of it by Viceroy Miguel José de Azanza in 1799, in which, for its part, referred to a previous assignment made in 1539 by Hernán Cortés.

A few days after that, on May 29 of that year, an area of ​​20,975 hectares was expropriated from the communal property for the formation of tourist territorial reserves, conserving a considerable part of the area in question without having been allocated to the objective of the expropriation in question.

Subsequently, in an area of ​​10,000 hectares of the expropriated area, a mangrove protected reserved area was declared in accordance with the Theran Convention on wetlands, which by agreement between SEMARNAT and USAID signed a few weeks after the end of Felipe Calderón’s mandate, which today is under the custody of the famous agency for the development of the state department known as the technical arm of the CIA.

The plane concerned in the so-called basic folder of the agrarian registry does not correspond to the restored area but to that of a previous Decree rejected by the Supreme Court of Justice of the Nation given a conflict of limits with the community of San Mateo Piña that touched in luck to fail said instance; So, in conclusion, for the issuance of the Presidential Decree for the restitution of communal property in favor of the town of Santa María Huatulco on May 26, 1984, the procedure of the law that governed the act was not followed at the time, which was not other than the Agrarian Reform Law of 1971.

The legislation under which the procedure in question was carried out, established in turn an additional compensation to the payment of the expropriation, consisting of compensation for any urbanization or subdivision that was made in expropriated areas equivalent to 20 percent of the value of the same, from which it can be inferred that the Santa María Huatulco communal commission is owed an amount equivalent to one-fifth of the cadastral value of the Huatulco hotel zone.

Father Clavijero narrates in his “Ancient History of Mexico” how the Mexican forces under Axayacalt dominated the region to such a degree that archaeologists have fully determined the Nahuatl linguistic predominance over the Zapotec language in the vestiges of the area called ” Copalita ”; What is surprising, on the contrary, is the reference of the Mercer of the Viceroy of Azanza to an allocation of lands made by the Marqués del Valle de Oaxaca at a time when he lacked all public authority for having been stripped of it in such a way expressed by Emperor Charles V.

In at least one area of ​​our coastline, it is confirmed a trace of precariousness in the real estate domain due to conflict of powers; Today, as time goes by, not only the inhabitants of the locality continue to be victims of this circumstance, but even the sword of Damocles of a supranational power deprives us of full control of our mangroves.