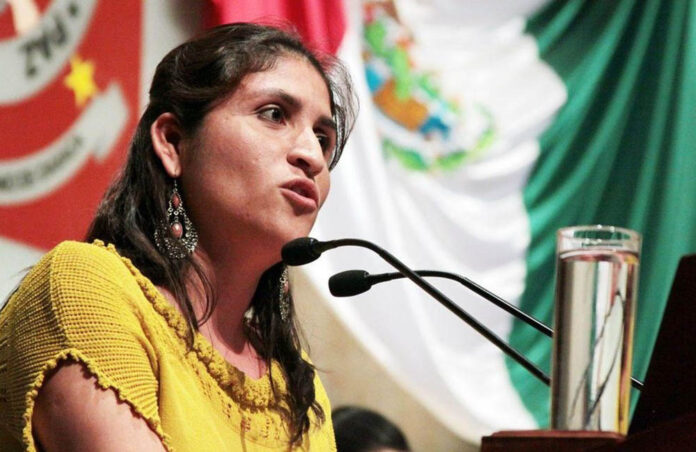 Oaxaca.- An armed group shot and killed Ivonne Gallegos, a pre-candidate for mayor of Ocotlán de Morelos, in the southern Mexican state of Oaxaca, almost two months before the largest elections in the country’s history.

Politics was traveling in the passenger seat in her private vehicle when she was attacked at the entrance to this municipality located in the central region of Oaxaca.

The man who accompanied her was injured and was taken to a hospital in the city of Oaxaca, where he is reported in serious condition.

Experts from the Oaxaca Prosecutor’s Office cordoned off the area and closed the road to carry out the legal procedures to determine responsibilities.

From his Twitter account, the governor of Oaxaca, Alejandro Murat, who is in the Papaloapan Basin accompanying the president of Mexico, Andrés Manuel López Obrador, on a tour, condemned the crime.

“I regret and condemn the attack in which Ivonne Gallegos lost her life; With respect to the autonomy of the Prosecutor’s Office, I request that the corresponding investigations begin so that this unfortunate event does not go unpunished, ”he said.

The state leaders of the National Action Party (PAN), the Institutional Revolutionary Party (PRI), and the Democratic Revolution Party (PRD) also held a press conference to condemn the homicide and demanded an investigation from the Oaxaca Prosecutor’s Office to identify those responsible.

The Oaxaca Prosecutor’s Office reported that the investigation with a gender perspective began of the events in which Ivonne Gallegos lost her life.

Ivonne Gallegos had participated as coordinator of the campaign against gender violence “Que te caiga el twenty”, in the Secretariat of Indigenous Peoples of the Government of Oaxaca.

The Government of Mexico reported on March 4 that at least 64 politicians had been assassinated since September 2020.

On June 6, the country will hold the largest elections in its history, renewing the Chamber of Deputies, 15 governors, 30 state congresses, and thousands of municipalities on the same day.

Mexico closed in 2020 with 34,531 victims of intentional homicide, a figure slightly lower than the 34,648 cases in 2019, considered the most violent year in the contemporary history of the country.

The Human Rights Ombudsman of the People of Oaxaca (DDHPO) initiated the file DDHPO / CA / 107 / (16) / OAX / 2021 for the murder of the candidate for the municipal presidency of Ocotlán de Morelos, Ivonne Gallegos Carreño, and requested the Oaxaca State Attorney General’s Office (FGEO) to adopt protection measures for the indirect victims of the act, which he condemned.

Through said file, the autonomous body requested an “effective and diligent” investigation that allows finding those responsible for this fact, because according to Bernardo Rodríguez Alamilla, the Oaxacan ombudsman, in the 2021 electoral context, actions must be generated to protect against women politicians who participate in the process, and punish all those acts that illegitimately put their participation at risk.

He said that it is essential to “send a message of security to all those women who have decided to participate politically” and asked the different levels of government to urgently implement actions to punish attacks against the contestants, but mainly to prevent the occurrence of more acts of violence.

According to the defender, only between 2020 and so far in 2021, the Specialized Ombudsman for Gender Equity and Attention to Women Victims of Violence has initiated 101 cases for political gender violence, for this reason, he emphasized that “political violence against women it is much more than a criminal problem since it poses very great challenges to democracy, human rights and gender equality ”.

And that is why it must be attended to from an integral vision that “guarantees a life free of violence for women in all areas of their lives, both publicly and privately.”

She recalled that added to the context of the historical violence against women, she indicated, the Covid-19 pandemic has placed women at greater risk in private life, but also in public life, so this electoral process “requires greater observance and strategies that allow guaranteeing the free exercise of women to participate in politics ”.

She stressed that the full participation of women in the political sphere is not only a human right that must be guaranteed but is an indispensable requirement for the proper functioning of democracy, for which she said it is essential to “end inequality gaps between men and women since this provokes acts of discrimination and different types of violence against women, the most serious and visible: femicide ”.

He added that the DDHPO will remain observant of the electoral process in which the State Congress is renewed, 153 municipal presidencies governed by the political party system, and 10 seats are disputed in the federal Chamber of Deputies.

There are 101 files for political gender violence that the autonomous body has initiated only between 2020 and 2021.