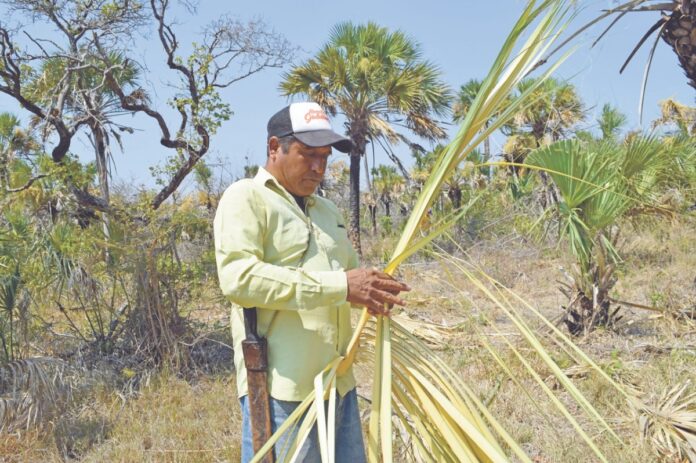 The office of the elders of Unión Hidalgo is in danger due to the devastation of wind turbines.

The primordial titles of Juchitán say that in the limits with the huaves there was a forest of royal palms that was called Ziña Gaayu ‘(Five Palms).

Now, the inhabitants of Unión Hidalgo know it as El Palmar, a space that, although it has been reduced by the invasion of wind farms, continues to be a natural lung and a source of employment.

Miguel Velásquez Lamí and Otilio Santiago are two burly old men who for more than 20 years have used the palm to make arsenals, such as hats, bags, blowers, baskets and toys.

With their 70 years, they obtain the palm of the 829 hectares of forest that are still conserved within the communal land. Also, they share the concern of the complete destruction of the area by new wind projects.

Miguel began in the artisan trade as a way to support himself in his old age, he is one of the five artisans who still survive in the community and for whom the palm is their only source of income. If El Palmar disappears, it will be left without a livelihood, as do hundreds who live off the cut.

“The wind farms seek to stay with El Palmar, if they enter they will destroy it and leave us without sustenance, without food … four months ago they killed the one who bought the palm from all the cutters and sold it in Puebla, but since he died no one buys , many sell as they can; This will get worse if the mills invade us ”, Miguel says worriedly.

According to a map prepared by the Union Hidalgo Commissariat of Communal Assets, El Palmar is marked within the polygon where the Piedra Larga wind developments of Desarrollos Eólicos Mexicanos de Oaxaca 1 (Demex) are projected, where 152 wind turbines are installed, as well as Like its Piedras Largas II expansion, the El Palmar area is shared by the Eólica Unión project, although it does not yet have a construction permit, it does have sections.

The community members say that their production has decreased since the construction of wind turbines, since they use cement, blocking the water veins that feed the palm grove area.

In addition, the peasants and palm trees are no longer free to walk around, they are questioned on their own land by the police who guard the wind farm.

Recently, in the 2018 ecological gazette of the  Ministry of Environment and Natural Resources (Semarnat), the federal government announced two new wind farms belonging to the German company Siemens Gamesa, these two projects are located between the estuary and the town: Palmita I with 15 wind turbines and Palmita II with 18, which means the destruction of some 1,589 hectares of the communal territory, in addition to affecting another area where the palm grows.

The community members argue that due to the wind turbines the humidity was reduced, which has caused that after cutting the palm it takes up to two months to sprout; before it took only 15 days.

Also, before the arrival of wind power plants, the area produced 40 thousand palm trees a week, that is, 30 tons. Currently, they barely reach 15 thousand palms a month, not even half, an amount that the 50 families that live on it make pay.

Otilio Santiago also denounced that there have been suspicious burns of the palm grove, although they are not large areas, they make them suspect that they are people related to wind projects who carry out the burns so that this area is devastated and thus can justify the presence of wind turbines.

Allowing the extension of new projects in El Palmar represents, for Otilio and other elders, the end of their trade and their income.

“Many old men in Unión Hidalgo dedicate themselves to weaving palms in the afternoons or mornings … it is an entry of money. If they end up with the palm grove, what will we live on ”, Otilio wonders, continuing to weave a small basket.