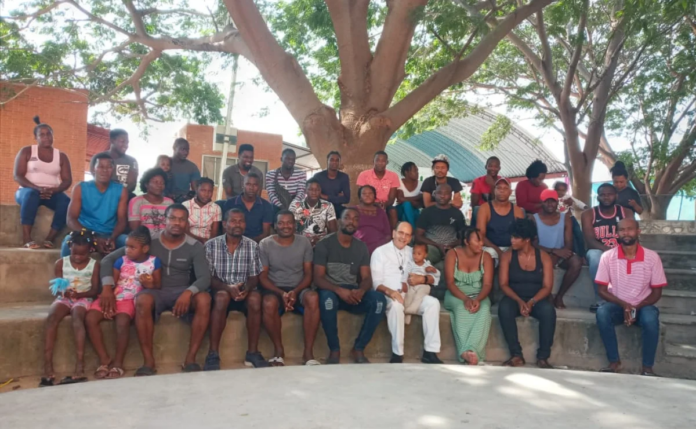 After surviving the violence in the jungle area of ​​the Darién Gap, at least 60 foreigners seek to settle in Oaxacan territory, so they ask for land to start a new life.

At least 60 Haitian migrants, who survived the hell of the Darien Gap, between Colombia and Panama, gave up their dream of crossing Mexico to reach the border and seek asylum and a better life in the  United States.

“We have already seen that they don’t want us there. We prefer to stay in Mexico as refugees and build our dreams of hope and development, ”says Protestant pastor Jean Wilbert Milfivier.

The 60 Haitians, including 12 children under the age of five and about 30 women, currently live in the Hermanos en el Camino shelter, which was founded by the priest Alejandro Solalinde in February 2007 in Ciudad Ixtepec. they join the trains that come from Veracruz and Chiapas. They arrived two months ago after a journey that forced them to cross 10 countries.

“We want Mexico to open its arms to us. Our dream is to live, grow and develop here in Ciudad Ixtepec or somewhere nearby, where they can donate the land to us to build a colony, have schools for the children, open businesses and workshops to survive, ”says the 35-year-old pastor.

In this regard, Solalinde Guerra comments that it has the purpose of helping Haitian migrants who seek that the Mexican Commission for Aid to Refugees (Comar) and the National Institute of Migration ( INM ) grant them the legal status of refugees, in order to that they stay to live in any entity in Mexico.

In the case of the Haitian brothers who are in the shelter, says the priest, “I will make a formal request to the authorities of the Commissariat of Communal Assets of Ciudad Ixtepec so that, in terms of donation, they provide us with a small area to create a community of Haitians on the Isthmus of Tehuantepec ”, he advances.

It reveals that in the case of just over 400 Haitians who are in Mexico City, the steps have already been taken to allow them to live in one of the communities in the state of Michoacán. There, he says, they were given 10 hectares of land. “These days we will go in a commission to appear before the Council of Elders,” he adds.

According to figures from Comar, until the end of September this year, a total of 26 thousand Haitians have requested to be granted refugee status in Mexico, a figure more than four times higher than the almost 6 thousand citizens of Haiti who asked for refuge last year. Now many more are leaving the country because violence has grown, explains Jean Wilbert Milfivier.

The migration of Haitians this year also grew after the assassination of its president, Jovenel Moïse, last July, and overflowed after a new earthquake struck that Caribbean country. Both factors unleashed violence carried out by criminal gangs who have dedicated themselves to assaulting and murdering families, Haitians say at the shelter.

“I am convinced that we must help Haitians, we cannot and must not be racist or xenophobic like some sectors of the United States are. Haitians are hard-working, studious, and productive. They left their country due to unemployment, hunger, and violence, and in the pursuit of their dreams, they have risked their lives ”, details the priest Solalinde.

In the shelter, with the spaces filled by Salvadorans, Guatemalans, Hondurans and Nicaraguans who are processing a humanitarian visa to live a year in Mexico and then find a way to continue to the United States, Haitians show off their skills. Some are stylists, others are bricklayers, there are mechanics, teachers, nurses and shopkeepers.

“With the Central Americans, some of them who have abandoned the caravan that for now is traveling through the towns of the Isthmus on its way to Mexico City, we are working with the INM to expedite their humanitarian visas in the port of Salina Cruz. But while they remain in the shelter, they have options to study ”, explains the priest.

For now, for example, in the Hermanos en el Camino shelter there are children who study at the preschool or primary level, there are also young people who are in secondary and high school, all with the support of the Ministry of Public Education ( SEP ), which has provided the educational keys; recently instructors from the Institute for Adult Education (INEA) began offering their advice.

“This is how we want to live, with schools, medicines, trade workshops, with peace, we want to leave behind the violence of Haiti, the hell we survived between Colombia and Panama, in the Darien Gap, a jungle area where gang members rape, assault and they kill. We want to dream and live ”, they say.