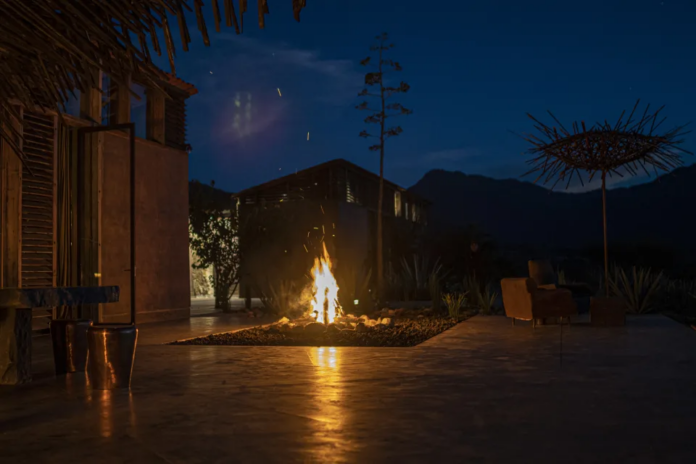 “No one dares order a margarita with any of these, or I’ll be very upset.”

Fausto Zapata, CEO and co-founder of Mezcal El Silencio, hovered around a table at his company complex near Oaxaca City, in the agave fields of southwestern Mexico. Beneath it was seven limited-edition bottles of mezcal, each with tasting notes engraved on thick black cards. Sirvió a splash Tobalá $ 150 per bottle in five bowls, containers traditional mezcal drink.

“Take a sip, put it in your mouth for ten to twelve seconds, let your taste buds expose themselves,” he said. The second sip was to be consumed in silence – save for the guitar melody playing through the surround sound speakers – to “get lost in the flavors.”

“Now move on to the next bite,” he said, pointing to a row of diamond-coated monochrome gummies, the sweets that might have turned out if Willy Wonka had ventured into making triple-digit tasting menus. He explained that some of the treats were made from mole, he went on a tangent about the history of mole (“It’s a beautiful story”) and grabbed another bottle by the neck: “Before I forget: you have to try magic black ”.

A deep purple liquid was served. “All natural, all plant-based,” said Zapata.

“What gives it its color?” Asked a woman.

“Trade secret,” said Vicente Cisneros, co-founder of El Silencio. He sat in front of Zapata with sunglasses. “Everything we do is copied from us in two seconds,” added Cisneros, shrugging, “but that’s why we’re innovating all the time.”

A legend says that several hundred years ago, in pre-Columbian Mexico, lightning struck an agave plant and released the liquid we now call mezcal. But credit goes to health-conscious consumers, valuation-seeking startup founders, George Clooney, or all of them – the international moment for mezcal is now.

The appeal of authenticity

According to Mexico’s mezcal regulatory commission, more than $ 413 million worth of mezcal was produced last year, up from $ 350 million in 2019. Americans are consuming it more than ever: Drizly, the application of alcohol to The letter recorded a 600 percent year-on-year increase in mezcal sales in the United States. The big alcohol conglomerates are clamoring to back the brands. El Silencio is partially funded by Constellation Brands, whose portfolio includes Corona and Robert Mondavi. Direct consumer companies are multiplying like agaves in the sun, including one backed by LeBron James called Lobos 1707.

Smoky and earthy, mezcal has become a mainstay of trendy restaurants and cocktail bars. But for many people, the drink’s appeal is its authenticity, which means that some of its proponents have mixed feelings about its sudden popularity and interest from investors away from Mexico.

“I never expected this sort of Columbus crusade,” said Bricia López, a Oaxacan woman whose Los Angeles restaurant, Guelaguetza, has more than a hundred mezcals.

López shrinks from fans or investors who talk about “discovering” the liquor. He says he likes the way El Silencio, owned by two Mexican citizens, is growing: sustainably and with the goal of creating wealth for the region.

“You can’t buy tradition, and that’s what people who are getting into the mezcal business are trying to do,” he said. “They try to stand next to someone who looks indigenous, take a picture, and say, ‘I’m authentic too.’

López added: “They create these brands, and they think they are inventing a story that is unique to them, but it’s the same damn story: ‘I’m a white guy who went to Oaxaca and fell in love with the people. “

It is understood that they try, given the case of Clooney. In 2017, Casamigos, the tequila brand he co-founded, was acquired by beverage company Diageo for an estimated $ 1 billion. That sale “sparked a flood of people who wanted to get into the industry,” explained Susan Cross, the co-founder of the Mezcalistas website. “They were thinking, ‘Look, there’s a lot of money to be made.’ But it is difficult to build a mezcal brand ”.

The most common species of agave takes seven years to mature. Mezcal is traditionally produced in small batches, a donkey grinds the smoked agave into a pulp and is then distilled in copper pot stills. According to one report, tequila had worldwide revenues of $ 9.4 billion in 2020. Mezcal revenues: about 4 percent of that number. Although tequila is technically a type of mezcal, Jalisco, the state that produces most of the world’s tequila, has an infrastructure that Oaxaca still cannot match.

“The biggest mezcal brand is under 100,000 cases,” said Harry Kohlmann, CEO of Park Street Cos., Which helps budding spirits brands expand. “But you have to think ten years from now,” he added. “There will be several brands that exceed 100,000 boxes. One will exceed a million boxes ”.

How to build a luxury brand

One of the first to get into the mezcal fever was John Rexer, a New Yorker who created his brand, Illegal, in 2006. He had developed a taste for mezcal in the 1990s when he imported furniture from Mexico. (He had also been smuggling unbranded mezcal across borders, hence the name.)

“Clean and without additives”

“I think we can be a several hundred thousand box brand,” Rexer said. “I hate to talk about demographics, but mezcal is something that generation Z and millennials have fallen in love with.”

It also helps the rise of mezcal: the notion that agave-based spirits are “clean,” or lack additives that can trigger a hangover and also act as stimulants, unlike other alcoholic beverages.

“No,” says Serena Poon, a certified nutritionist, and Reiki practitioner. “All alcoholic beverages are depressants.” (He repeated it two more times). “Pure agave distillates can be ‘cleaner’ because your body is not processing as many ingredients as it would with an alcoholic soda or sugary cocktail. It’s no different than eating whole foods instead of something packaged. “

The same could be said for any spirit drink without additives: vodka, for example. What makes mezcal especially appealing to certain consumers are the variations in flavor and provenance, while premium vodkas pride themselves on being tasteless. For example: Guerrero de Clase Azul mezcal, from the Mexican state of the same name, has a noticeably more woody and spicier flavor than their Durango mezcal.

“One day, people will go to Oaxaca like they go to Napa,” says López. “It’s already starting to happen.”

Specifically, it is happening at Casa Silencio, El Silencio’s luxury getaway in an agave field. This first-of-its-kind venture might have seemed unreal a few years ago, but now it feels foreboding.

“We don’t just sell mezcal. We sell Oaxaca in a bottle, “said Zapata.

A company is born

There is nothing in sight in the surroundings of the complex, except the agave spikes; Zapata and Cisneros, Silencio’s marketing director, financed the construction of a one-and-a-half kilometer highway to the outskirts of the nearest city, Xaaga, to make their hotel accessible.

Born in Mexico City and childhood friends, the founders reconnected in Santa Monica, California, a decade ago when their children were in the same kindergarten group. In 2013, Zapata, then a real estate developer between projects, met the founder of the Chase Foundation, which offers quality-of-life services to terminally ill children.

Zapata offered to create a fundraiser, which quickly turned into a plan to turn a Beverly Hills hotel bar into a mezcalería for one night.

Zapata asked Cisneros, a designer, to help him with the event. They made four trips to Oaxaca and “fell in love with the whole process,” Zapata said. Except for one part: the transportation of boxes of mezcal without a license or regulation to the United States.

They convinced their friends to drive to a warehouse in Tijuana; one of them was arrested and forced to empty his merchandise. Tickets for the event were sold out. The next morning, Zapata and Cisneros woke up to a screen full of text messages, all with some version of the same message: “How can I get your mezcal?” Zapata said: “I called Vicente and told him: ‘Friend, I think we have a company.’

Constellation Brands’ investment – an amount both parties declined to disclose – helped El Silencio increase distribution and build the complex, which also doubles as a distillery and office for some of the company’s 79 employees. Visitors can chop up the agaves, toss them into a smoke pit, and nod as guides promote the distillery’s one-ton, solar-powered stone grinding wheel as a more humane and sustainable method of grind the toasted agave than the traditional donkey stomp.

“These animals defecate while they work,” says Zapata. “We do a double distillation, but still …”.

A “feeling of warmth”

This boiling industry has attracted newcomers, like a year-old Rosaluna, creating “best friends who traveled together, drank together, and partied together,” said co-founder Nate Brown.

Brown, the former creative director of Kanye West, and his co-founder, Terry Lee, a former MeUndies executive, didn’t know how to make mezcal when they created Rosaluna. But they were consumers. “We were always very aware of what we were getting into our bodies,” Brown said. “We were agave drinkers.”

On a ski trip a few years ago, after a few mezcals, they talked about creating a mezcal brand. “We’re not from Mexico, we didn’t know who we were going to talk to, but then something like this happened: ‘I met a guy named Pepe at a Miami Heat game. What if I send him a WhatsApp right now? ‘ remembers Brown. “I sent him a kind of text message written by a drunk and the length of a novel.”

Pepe Mireles Verástegui became the third co-founder of Rosaluna, which is now the mezcal of the Soho House clubhouse in the United States.

The founders of Rosaluna have included JJ Méndez León Jiménez and Frida Méndez León Jiménez, the Oaxacan brothers who oversee the production of their mezcal. David Mayer de Rothschild, the youngest heir to the banking family and founder of the year-old lifestyle brand Lost Explorer, did the same with his Oaxaca growers, Don Fortino Ramos and his family. “There is a gold rush,” he said, adding that he was aware of the reaction of those who want the spirit to remain local and artisanal.

Critics have lamented imperialism in the mezcal industry: the coastal elites who fly, collect their product, and sell it for a price ten times higher in their country. “Maybe they just want to have a little liquor, put it in a nice bottle and be great salespeople,” Lopez said. “Is incredible. Good for them. People like that can go to the jungle and sell plants. It is a skill ”.

When he buys for his restaurant, he looks at the seller: “Now, any mezcal he carries has to be owned by a woman, a Mexican, or it has to have the producer in some kind of ownership structure.”

It remains an ever-present tension to find an economic opportunity without destroying what made mezcal popular.

“I think the reason people bet on mezcal is that tequila has gotten boring,” says López. But the new kid on the block – or behind the bar – can only be novel for so long. “It’s the same thing that happened when people stopped drinking vodka and started drinking tequila.”