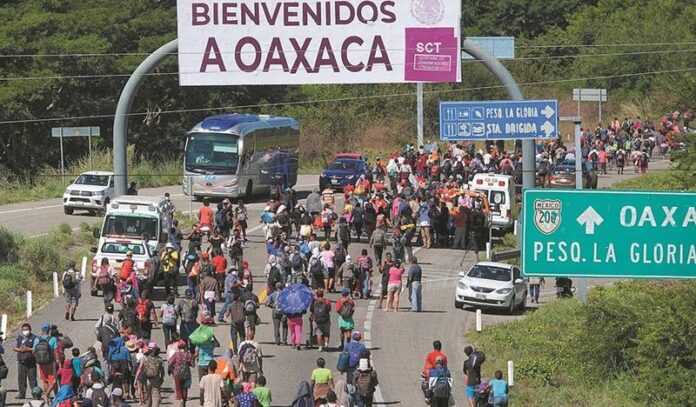 They will not allow your entry

Precisely in Chahuites, as well as San Pedro Tapanatepec, Santo Domingo Zanatepec and Santiago Niltepec, the municipal authorities announced that they will not facilitate the entry of the contingent, due to the fear of contagion by Covid-19 and the possibility of acts of violence.

The coordinator of Civil Protection in the Isthmus of Tehuantepec, Jesús González, confirmed that the mayors of those municipalities, located on the caravan route, on the Pan-American highway, informed him by telephone that, by agreement of their respective councils, they adopted the determination to prevent the entry of migrants into their jurisdictions.

The contingent made up of some 3,500 foreigners, half under the age of 7, left Chiapas territory after traveling 246 kilometers in 16 days

Shortly before 9:00 in the morning of this Sunday, members of the migrant caravan left Chiapas territory and began to enter Oaxaca.

The crossing took place in the town of Corazones, in the municipality of Chauites.

The migrants were expected by personnel from the National Institute of Migration (INM) and the Beta Sur Migrant Protection Institute to offer them the possibility of regularizing their immigration status in the state of Puebla, an offer that was rejected.

With this proposal, INM personnel changed their tactic of stopping the migrants who lagged behind in the advance of the caravan, by offering them humanitarian cards so that they could remain in Morelos, Oaxaca, Campeche, Hidalgo, Guerrero, and Querétaro, with the commitment not to return them to Tapachula. Nonetheless, the migrants were adamant about crossing the country to try to enter the United States.

Thus, the contingent made up of some 3,500 foreigners, half under the age of 7, left Chiapas territory after traveling 246 kilometers in 16 days, during which they only once faced elements of the National Guard.

The thousands of foreigners travel down, injured, blistered, dehydrated, in low spirits and sad after the long journey.

María Molina is a migrant woman from Honduras who has managed to walk more than 200 kilometers: “I am tired, our feet are damaged and our spirits are ending, sometimes eating and sometimes not,” she declared.

Despite the long stretches that have changed, what they want “is to get to Mexico City, because I’m looking for my daughter Rizty Fabiola Andrade,” the woman said.

“The walk is too hard, I come alone, with the blessing of those who have given me strength, because in some municipalities they have supported us and in others, they have not,” he added.

The woman walks with the hope of finding her daughter since her son was killed in Honduras. She shows the spirit of being able to move forward but says it would be good to rest for two or three days “to be able to continue at 100% and continue walking .”

Last Saturday, the caravan left Arriaga, Chiapas, in order to go to Tuxtla Gutiérrez and request a bus ride, and then take the Gulf route, but the authorities closed vehicle traffic, forcing the contingent at the last minute to advance to the state of Oaxaca.

For his part, Irineo Mujica, coordinator of Pueblos Unidos Migrantes, denied that there had been cases of coronavirus in the caravan. “Yes we are sick, but from the oppression exercised by the federal government by turning our passage into hell with the harassment of the National Guard and the INM,” he said.