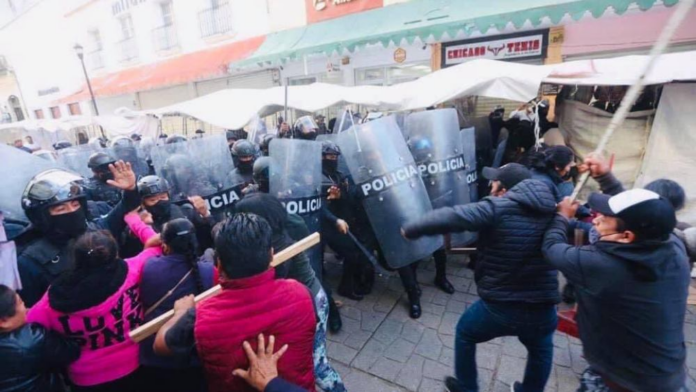 Since the morning of this Friday, anti-riot elements entered the vicinity of the 20 de Noviembre and Benito Juárez markets, where a large number of street vendors had been installed for more than two months when they were evicted from other streets in the center of the city.

They asked them to voluntarily lift their posts, but in the face of their refusal, street trade inspectors and municipal police began to remove the mobile stalls.

The merchants then attacked the police, throwing stones and sticks, the elements responded to the attack by launching tear gas against the street vendors.

The municipal police reported two elements injured by blows and stones, and from the side of the street vendors, it is unknown if there were people injured.

“They gave a few moments for them to do the eviction, and the removal of their structures, there was no response, then the operation entered to remove the structures and above all take control, there are no arrests so far, we have not come to stop , we come to take control, to reestablish and support the established trade ”, he added. Marcos Fredy Hernández, member of the Municipal Police.

The police removed at least 600 semi-fixed posts in the streets of Las Casas, Flores Magón, Bustamante, 20 de Noviembre, Aldama and others surrounding the first square of the city.

After the confrontation, the street vendors demonstrated in the municipal palace of the city of Oaxaca, to demand a dialogue table.

Clean up begins after removal of unlicensed street vendors