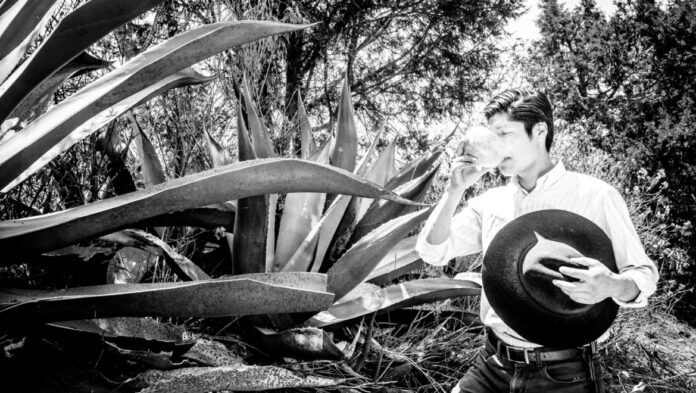 “ Pulque blessed sweet torment, what are you doing outside? Come inside ! “

Nestled in the mountains of the Mixteca Alta region of Oaxaca, Mexico there is a place known as “El Almacén”, belonging to the municipality of Santa María Apasco and the district of Nochixtlán, place of the large cochineal. In this small town, every day peasant families such as Roque Rodríguez (“Pulques Onésimo”) collect the mead from the pulque agaves (magueyes). Every May, the Millennial Women organization and the local authorities convene annually to celebrate the “Festival of the Maguey Pulquero and its derivatives”, which consists of a traditional calenda, ritual, and exhibition. Also tasting pulque and mead, typical gastronomy with derivatives of the maguey and traditional music. As well as a contest for the best pulquero (a) in the region.

Pulque, which is of pre-Hispanic origin and is also known as octli, had its peak as a drink during the beginning of the 19th century in central Mexico, however, when the beer and soft drink industry entered the country to the right and left, it suffered from a campaign of revulsion, slander and discredit. This whitish liquid is rich in nutrients and is also attributed to numerous medicinal and healing properties ranging from gastrointestinal diseases to some as relevant as the scientifically proven anticancer function of the prebiotics it contains.

Currently, it is beginning to regain relevance among Mexican and Oaxacan society, which every day more and more seeks to reconnect with its identity and its glorious ancestral-pre-Hispanic Mesoamerican past. This magical, religious sacred drink is without a doubt the antithesis of eco and ethnocidal capitalism and its stellar black waters known as cola.

The soft drink industry 一 which represents the true pandemic 一 has sickened Mexican and Oaxacan society with obesity, osteoporosis, hypertension, and diabetes. It has also become a sendo socio-environmental conflict due to the notable hoarding and irrational exploitation of the country’s aquifers, always being favored by the political class who have created reforms to article 27 of the Constitution for the benefit of individuals and large multinational companies such as Pepsico, Nestlé, Danone, Femsa (Coca-Cola), Modelo, etc. and always to the detriment of the collective rights of peoples to a healthy environment, as well as access to this essential liquid for sustenance and continuity of life.

Now more than ever it is time to reconnect with our roots, always knowing that reconsidering the origin is not going back and perhaps it is actually walking towards knowledge. To privatize water is to privatize life. So make a homeland (multicultural) and drink pulque and not the sewage typical of suicidal capitalism at the end of the world.