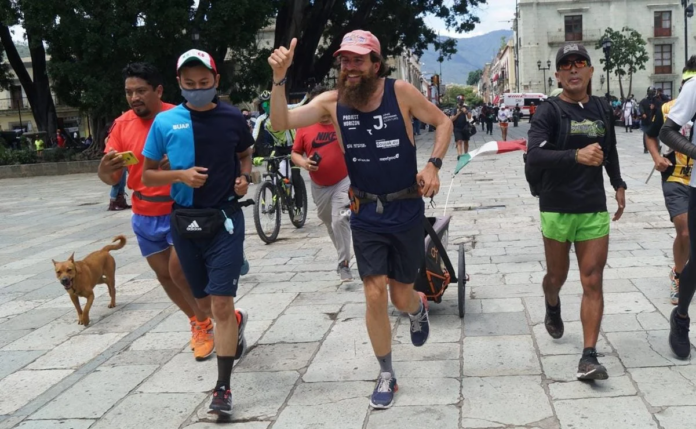 The athlete’s journey began last June 10 in Tijuana and will culminate in Cancun, Quintana Roo, where he plans to take a cruise to Portugal and later to his country of origin.

The German athlete Jonas Deichmann, known as “Forrest Gump” for his love of running long distances, arrived this Wednesday at the Zócalo of the city of Oaxaca, on his journey through the country, where he seeks to set the record to travel through Mexico in 120 days, running a marathon for each day.

The athlete’s journey through Mexican territory began on June 10 in Tijuana and will culminate in Cancun, Quintana Roo, where the cyclist also plans to take a cruise that will take him back to Portugal and later to his country of origin, in order to complete around the world.

Deichmann left his native Germany in September 2020 and will soon conclude his tour.

On his arrival at the Zócalo of the state capital, accompanied by friends and people who decided to join in this section of the road, the athlete took the opportunity to greet those who know his journey and take some photos with admirers.

At a collective press conference, the athlete pointed out that the purpose of his route is that for every kilometer he travels, whether swimming, walking or cycling, one euro will be donated by a non-governmental organization, which will buy bicycles for children from the African continent that, he said, they require them to travel long distances in order to attend school:

“I do it for two reasons. First, for me it is the purpose of adventure … I know that it will be something spectacular, something that I have never seen before in my life, and I also do it for children in Africa, because in small towns there are no schools many times and there is no public transport…”.

Coming from Tehuacán, Puebla, on Sunday, August 22, he arrived in San Juan Bautista Cuicatlán, Cañada de Oaxaca region; This Wednesday, from early on, he resumed his way until he reached the city of Oaxaca, escorted by other runners, cyclists and agents of the State Highway Police.

According to local media, the triathlete was received in Cuicatlán by the municipal president, Maricela Mariscal Gaytán, and by residents of the same municipality, who welcomed him and accompanied him from the Guadalupe de Los Obos agency to the main entrance to this population.

The German triathlete spent a night in Cuicatlán to continue his journey to the city of Oaxaca.

During his journey, sports clubs from the Mexican states have accompanied him, wishing him success on his journey and reaching the goal of completing the equivalent of 120 marathons, at the end of his tour of Mexico.

The real-life Forrest Gump will culminate his journey until mid-November, in what the athlete has called a 360-degree triathlon.