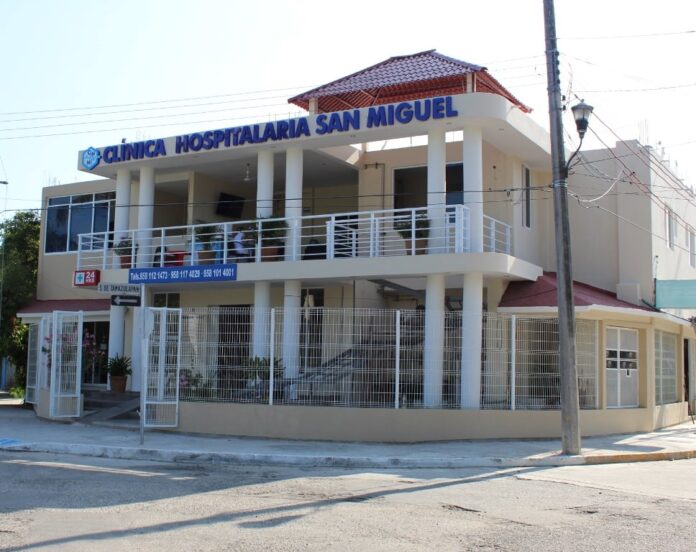 Santa María de Huatulco, Oaxaca .- Karen Palma Robledo came on a trip to Bahías de Huatulco, she thought she would be staying for a few weeks enjoying the natural beauties that Huatulco has, she came with her child, at that time it was a 3-month-old baby of age and had planned that after living a pleasant experience of this trip, she would return to her native Colombia.

Karen Palma studied General Nursing and has several specialties, one of them in Intensive Care. She never imagined that while on vacation in Huatulco, which seemed to him a wonderful place, he became seriously ill with “type C pancreatitis” requiring a surgery known as “cpre” which, due to its complexity, is only performed by specialist doctors. To reach the diagnosis, it was extremely complicated, requiring to be traveling from Bahías de Huatulco to the municipal seat of Santa María Huatulco at various times, during two or three days, until they gave the diagnosis, transferring in an ambulance to the Hospital de Alta Especialidad Oaxaca Regional, located in San Bartolo Coyotepec, where she underwent surgery and successfully emerged from this very complicated condition,

Having lived all this odyssey on his vacations in Bahías de Huatulco and having a second chance at life, he wanted to show his gratitude, providing a social service, achieving this through providing medical services to the population of Huatulco, making available medical consultations at a very affordable cost.

This was achieved in the immediate term and afterward, her goal was to resolve the need to provide medical specialty services, in a hospital that also had basic laboratory and cabinet studies, for tourists arriving from different countries, so that they would not live the difficult moments that she lived with anguish and uncertainty.

This is how after conducting a market study and consulting with local doctors, and her desire to set up medical services within the reach of anyone was greater, that with many efforts Karen, supported by some good-hearted Huatulqueños, managed to open the first office. which was called “Home Doctor”, since the name has to do with medical care at home 24 hours, or in an office, in both cases with a cost of recovery of $ 50 pesos.

This made many people use these services because of the low cost and others, to receive medical care at home, which was a true privilege to enjoy this care, as only very financially solvent people can receive it, with the difference that here, this care is available to the person who requests it.

With a great desire for improvement and with the good response of the public, she had the ability to open a hospital clinic with complementary services to facilitate obtaining an accurate diagnosis, such as tomography, X-rays, laboratory, etc., which began with ups and downs, because setting up a well-equipped hospital is extremely expensive, so a year ago when it seemed that economic stabilization was going to be achieved in the company, the whole world faced the negative economic effects of the Covid-19 pandemic.

This situation affected the long-awaited economic stability of the project, being still and for a long period of time gradually coming out of the contracted monetary commitments, but Karen as a visionary that she is, sought and managed to expand her services as a “Doctor at Home”, so that With this income, you can settle your liabilities (as many companies are struggling to get ahead), thus managing to enter Los Cabos, Cancun and Mexico City itself. (Hoping to help with this expansion to get out of the red numbers with which it has been working).

Within this expansion, it was also possible to structure an application called “Doctor at Home”, which is currently operating in his native Colombia, and after a procedure, it will be available in our country. For now, it is already working, progress has been made significantly, currently having a “Call Center” to request services and which operates 24 hours a day, 365 days a year.

Motivated by her children and her husband, Dr. Froylán Ortega Salinas, Karen Palma works with great passion, creating ideas to grow, being absolutely grateful to Huatulco and its people. That is why it performs altruistic works such as giving medical consultations in communities, carrying out free sanitation to taxi drivers to prevent Covid-19 infections for 30 days, and various other actions.

Karen Palma can be contacted through her Facebook page “Clínica Hospitalaria San Miguel”, and through WhatsApp at the number 9581174029.

The projects that Karen Palma started in Huatulco have a profile that goes beyond the borders of the country, always entrusting herself to God and with her 5 senses attentive, to take firm steps, the steps of success.

Karen Palma also invites the general public so that when they visit Huatulco they do not stop going to “La Bocana”, where there is a great variety of activities to make the trip an unforgettable experience.