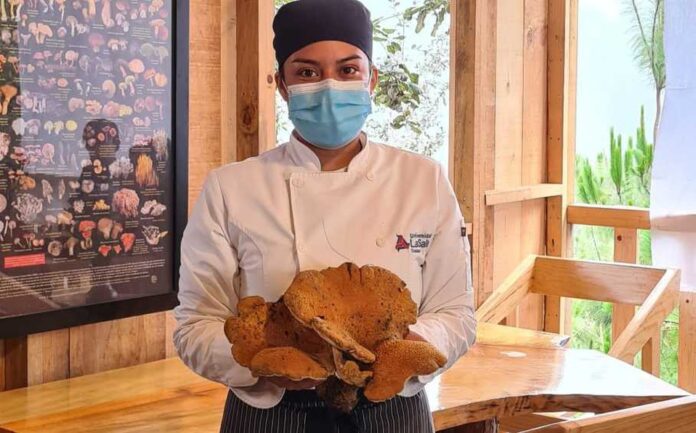 Osvaldo Sandoval, a specialized biologist, refers to fungi as “a treasure that the rains bring”.

Mushrooms are renowned for their health benefits and versatility in the kitchen. In Oaxaca, they are characteristic of the rainy season and highly appreciated for their flavor and nutritional properties, which enhance the value of the gastronomic culture of Oaxaca.

Ariadna Pinacho, researcher and executive chef of the restaurant “Huitzil”, shares with us that between the months of June and September the appearance of a great diversity of mushrooms proliferates. In the area of ​​San José del Pacífico, he said, located at 2,600 meters above sea level, more than 16 edible varieties have been detected, since “the height and the rains favor the outbreak of fungi such as amanita basi or “Nbey yup” (red mushroom) which is very special because it only comes out during the first weeks of June ”.

While in July they manage to stock up on varieties such as ramaria or little deer, with a strong flavor and used to prepare moles such as yellow. “To cook this variety it is essential to use ingredients such as pithione, epazote, and garlic so that the body prepares and digests it properly,” he warns us, realizing the importance of the relationship between the ancestral knowledge of the peoples. and the consumption of edible mushrooms.

One of the most special mushrooms they have in San José del Pacífico is deer, since “a year we only have two weeks to find it, it all depends on the rains. It is highly appreciated because it brings a very special flavor to the segueza, a recipe that also includes dried chili and toasted corn; due to its qualities and texture, it is as if you were eating a piece of chicken breast ”.

To pay tribute to this element of mother earth, chef Pinacho tells us that in San José del Pacífico tours and workshops on mushrooms are held, which aim to spread the knowledge that this community has acquired from generation to generation and the importance of these organisms for the environment.

Another locality that is distinguished by its variety of mushrooms is San Esteban Atatlahuaca, the main producer and promoter of this element in the Mixteca region, which celebrates it every year with “La Fiesta de los hongos”. The program is developed with activities such as collecting, exhibitions and seminars on mycophilic culture, varieties and benefits.

Osvaldo Sandoval, a biologist specializing in mycology, disseminates the qualities of this leading element of Mixtec cuisine in the state of Oaxaca, and which he refers to as “a treasure that the rains bring and that give a deep meaning to the culture of exploitation of the region ”. Sandoval explained that, in this region of Oaxaca, more than 54 edible species are documented that during this season are the main food of the place.

Various factors intervene in the collection that requires knowledge and experience, it is necessary to know how to distinguish and classify the edible and inedible, “a delicate ritual with great significance that few can access. Wild mushrooms are used by traditional cooks in the preparation of broth with epazote, tamales, and moles, among other recipes ”.

For his part, Israel Loyola, executive chef of the “Sin Nombre” restaurant, tells us that he maintains a close relationship with the peasants; organic ingredients such as mushrooms, corn, tomatoes, chili peppers, and aromatic herbs stand out in his kitchen. During the rainy season, it works with suppliers to collect mushrooms such as the matsutake, considered the Mexican truffle.

“The best recommendation and the only way to safely access wild edible mushrooms is to acquire them through the people of the communities in which they occur. Because they have developed an ancestral knowledge that cannot be substituted with any book ”, warns the chef from Huajapan de León.