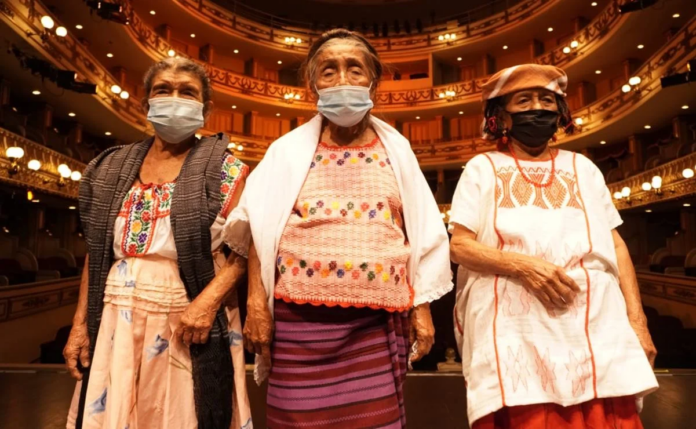 She has dedicated her life to preserving the traditional knowledge of their communities, through their ancestral knowledge

Oaxaca de Juárez.– When Cristina Toribio Mateos, an Ayuujk priestess, was invited to register in a convocation that seeks to recognize ancestral knowledge, this 88-year-old woman from the Mixe region asked the first thing if they wanted to imprison her for continuing to practice rituals. .

It was until her grandson explained to her that outside her community there was an interest in the knowledge of generations that she conserves, that this monolingual woman agreed to participate and share, for example, the importance of the rituals she practices.

“She says that it is important to perform these rituals as a form of protection so that nothing bad happens to the new authorities. She performs this ritual when the authorities change, to ask for the protection of deities and souls, ”says Juan Carlos, Cristina’s grandson, who is in charge of translating her words.

Like her, in addition to being over 80 years old, María Quiroz García and Estela Rojas Santiago share something else in common with Cristina Toribio Mateos: they have dedicated themselves to preserving the traditional knowledge of their communities, through a lifetime of work as midwives. , healers and even, like Cristina, as a priestess.

It was for this work that they have now been named as “Living Human Treasures”, a recognition carried out by the government of Oaxaca, through the Secretariat of Cultures and Arts of Oaxaca (Seculta), with which it seeks to “identify and recognizing the cultural identity practices ”of the communities to“ preserve the living heritage that allows the visibility of the knowledge they keep ”.

Cristina Toribio Mateos, for example, is 88 years old and is originally from San Juan Cotzocón Mixe, a community located in the northern Sierra of Oaxaca that is inhabited by the Ayuujk people; in her case, she was recognized for her legacy as a priestess.

Originally from San Juan Colorado, Jamiltepec, in the Costa region, María Quiroz García is another woman named “Living Human Treasure”. She is 88 years old and has worked as a midwife and healer throughout her life.

While Estela Rojas Santiago is 80 years old and is a native of Santa María Temaxcaltepec, a community that is located in the Costa region, and who has also given her life to her work as a midwife and healer.

All of them are winners of the Call “Living Human Treasures”, issued by the Seculta in coordination with the Federal Government, and with which it is intended to preserve the living heritage “that allows making visible the knowledge they keep, their experiences, experiences, by the wisdom that they have inherited from their mothers, their fathers, their grandparents, their cultures and communities ”.

It was with that purpose that this Thursday the “Living Human Treasures” discussion was held at the Macedonio Alcalá Theater, which was moderated by the teacher Salvador Sigüenza and is available on the dependency’s YouTube channel.

According to the Seculta, at the meeting, the participants recognized their commitment to keeping the cultural practices and expressions of their areas of influence current, being a benchmark of identity and values ​​for their culture.

“This activity promotes the cultural wealth of the state of Oaxaca, which has Living Human Treasures that seek to inherit their knowledge to new generations so that the culture, customs and traditions of the Oaxacan communities transcend and remain present,” said the Seculta.