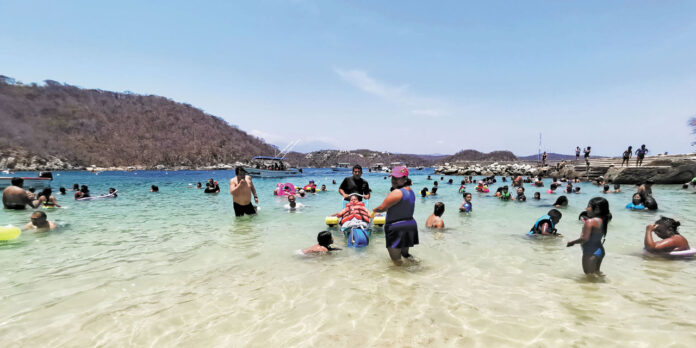 Curfew in Puerto Escondido but beaches reopen with a maximum capacity

The service of beaches, bays, and rivers, as well as the service provided by restaurants in those areas, will be available from 09:00 am to 17:00 pm, by order of the authorities

The municipal government of Santa María Huatulco determined this Wednesday that it will open its beaches, bays, rivers and tourist services, with limited hours and capacity, as well as with high fines for those who violate the provisions, after several days of internal and controversial debates with hotel businessmen who refused to abide by the provision for the closure of beaches, as part of the measures to combat the third wave of Covid-19.

The service of beaches, bays and rivers, as well as the service provided by the restaurants in those areas, will be available from 09:00 am to 17:00 pm, by order of the authorities, with a maximum capacity of 30% while it lasts the epidemiological red traffic light, which for now is set from August 11 to 18.

The lodging services, including houses for rent and Airbnb, establishments with food sales, swimming pools, spas, spa spaces, temazcales and the like must also observe a capacity of 30%, explained the authority in the Municipal Gazette; the same case applies to restaurants and shops in the urban area

Bars, nightclubs, botanero centers, discotheques, clubs, mezcalerías, viewpoints, places of worship, educational centers, associations and the like must completely suspend their activities. In addition, the hotels will not be able to sell alcoholic beverages or hold social events.

While travel agencies must notify their clients that they must carry their vaccination certificate or have a negative test for Covid-19, within 72 hours of entering the municipality.

As part of the sanitary measures, employees who provide nautical tourism services must also verify with the Federal Maritime Zone Directorate (ZOFEMAT) that they have received the Covid-19 vaccine or at least the first dose, depending on the type of biological they have. received.

The fines for people or companies that disobey these measures reach 17 thousand pesos, suspension of activities for seven calendar days, arrest of up to 36 hours and a fine of 500 pesos for not wearing face masks.

The Cabildo reaffirmed that it will remain on an epidemiological red light from August 11 to 18 and reported that until this Wednesday it has confirmed 1075 cases of Covid-19, 244 suspected cases, 51 deaths, 789 recovered cases and 189 active cases with potential for contagion.

The municipal authorities will evaluate the situation of the municipality in relation to the pandemic each week, and will determine the changes in capacity and the measures in general, depending on this analysis.

This decision comes five days after the municipal president of Huatulco, Giovanne González García, along with six other councilors who are part of the Alliance of Municipalities of the Oaxaca Coast, declared the area on maximum alert and determined the closure of beaches to cut the chain of Covid-19 infections.

However, the Cabildo made public its disagreement and affirmed that only a capacity of 30% would be allowed, but not the total closure of beaches, bays, hotels and restaurants. Finally, after a full day of deliberations, on Sunday, August 8, the municipality determined that it would join the alliance agreement.

Given this determination, the Association of Hotels and Motels reported its rejection of the decision made by the municipal government of Huatulco “since it goes against the economy of thousands of families and the future of the tourist destination,” and reported that their companies would continue “Open and operating as usual, doubling down on sanitary measures”.

Curfew in Puerto Escondido but beaches reopen with a maximum capacity

In addition to the “street vendor restriction”, the suspension of the sale of alcohol was determined after 9 o’clock at night.

Puerto Escondido part of the sanitary measures carried out by the municipality of San Pedro Mixtepec , to which part of the beaches of Puerto Escondido belong , the implementation of an “ambulatory restriction” was approved , that is, a curfew for the who walk in the street at night without doing an essential activity.

The restriction, which is intended to cut the transmission chain of Covid-19, begins at 11 at night and ends at 4 in the morning , so that the person who is surprised outside their home at that time without performing an essential job, according to the decree, will be arrested for three hours.

In addition, the municipality also determined the suspension of the sale of alcohol after 9 at night. These decisions, taken in a Cabildo session, will be applied as of Thursday, August 12.

San Pedro Mixtepec is not part of the Alliance of Municipalities of the Coast, made up of seven municipalities that decided to close their beaches and declare themselves in the red light.

Independently, this municipality determined its restrictive actions to combat the pandemic without affecting local commerce.

Among the sanitary measures approved by the Cabildo is a maximum capacity of 300 people on beaches and the mandatory use of face masks in public spaces.