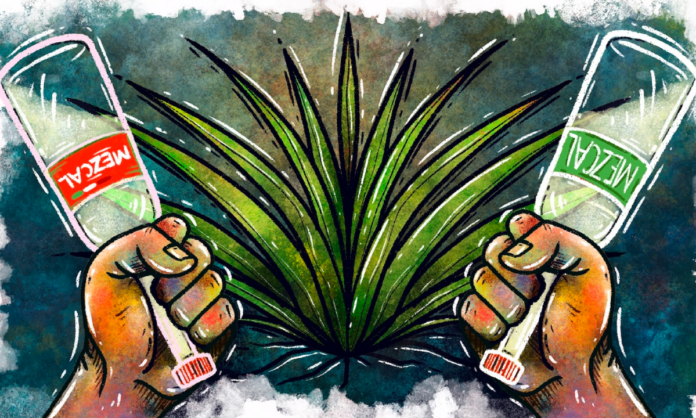 Oaxaca de Juárez.— Juanito Martínez Santiago affirmed that the Board of Directors of the Mezcal Regulatory Council ( CRM ), which he heads as President, is the only one with official validity and demanded that the Tax Administration Service (SAT) not give access to the tax account from the body to any other outside person; in particular to the Board of Directors of the CRM led by Abelino Cohetero Villegas, who is also assumed to be the legitimate President.

At a press conference, he also demanded that banking institutions and the Mexican Social Security Institute (IMSS) ” not be surprised with false documentation” to carry out legal procedures.

He also denounced that he has received death threats personally and against his family, for which he blamed the former vice president of the CRM, Nicolás Cruz García, and Abelino Cohetero, because their voices are fully identified in audio broadcasts in the media.

“The threats received represent a huge concern, since they are added to a growing number of intimidations that the members of the Board of Directors have suffered, as well as the plant of workers who decided to continue working in our certifying body, including women and the Most of the mezcaleros who continue to entrust the certification of their mezcal to us, ”he said.

On June 1, 2021, the members of the CRM board of directors that are assumed to be legitimate, held a meeting at the Federal Ministry of Economy where they agreed to delay the legal procedures of the parties involved.

The foregoing, until creating the necessary conditions to make a new election or seek some other way of solving this internal conflict in the Mezcal Regulatory Council; and a new meeting was agreed in three weeks.

Juanito Martínez assured that Abelino Cohetero breached this agreement and carried out various actions “to take the leadership of the certifying body by storm.”

The first of them, he mentioned, was the dissemination of a document with false signatures and documents of mezcaleros who have already died, as well as a call to elect the board of directors in San Dionisio Ocotepec on May 15, 2021; in which he was elected as president of the Council.

However, he affirmed that he made a mistake when registering the minutes of that assembly before the Institute of the Registry Function of the Judicial District of the Center of the State of Oaxaca because they misprinted the name of the civil association, which is the Mexican Regulatory Council of the Quality of Mezcal; They were missing a letter because they put the Mexican Regulatory Council for the Quality of Mezcal, that is, the letter L.

“Since he could not change his registration, he has carried out illegal acts, such as creating a bank account in the name of the Council and Abelino Cohetero as legal representative; With the same dynamics, he surprised the Mexican Institute of Social Security where he was able to put the employer’s registry in his name; however, when he went to the SAT, his application was denied for carrying false documents, ”according to Juanito Martínez.

Finally, he requested a meeting with the attorney general of Oaxaca Arturo Peimbert Calvo, whom he demanded to conduct himself with honesty and transparency; while the Human Rights Ombudsman of the People of Oaxaca (DDHPO) requested the necessary protection measures to protect his life from threats

Mexico’s star drink is in crisis. Two groups within the Mezcal Regulatory Council dispute the control of this body, which grants the certificate of designation of origin. Thousands of bottles are awaiting the long-awaited hologram and producers are mired in uncertainty.

TheMezcal Regulatory Council (CRM)is recognized as the body that certifies the quality of mezcal in Mexico. Today he is involved in a historical crisis that puts the mezcal industry in check, having a president voted in a dissident assembly and another who resigned a few hours after being elected by a few but called new elections to vote for a third president.

Héctor López, a small producer in the state of Guerrero, regrets that the more than 2,400 associated with the CRM are in uncertainty, but recognizes that a change in the ownership of the organization is necessary, after years of having suffered monopolistic practices that privileged some Few producers and prevented many from having a Denomination of Origin certificate that would allow their product to be marketed as “mezcal”.

The instability in the presidency of the CRM generates a legal problem for the mezcal company of López, called Don Odilón, since after the harvest and production season of the drink it has stored almost five thousand liters that they need to certify them to be able to put them on sale. “Right now I’m waiting for the waters to calm down, for when the time comes to clarify the situation and be able to certify,” says the micro-entrepreneur, confused by which president of the CRM will give legal certainty to the certification of his product.

But, how is it that the Mezcal Regulatory Council got that situation?

In order to obtain the Denomination of Origin certificate from the CRM, mezcal producers have to go through a process of verification and opinion on the quality of their product. Before, they carried out this process in a state agency called the Oaxaca State Institute of Training and Productivity for Work (ICAPET). However, this laboratory, which was located in the mezcal area of ​​Oaxaca, stopped working in 2008. As of 2012, when Hipócrates Nolasco assumed the presidency of the CRM, Nisa Nabani – a laboratory that was then owned by Nolasco – was becoming the only one based in Oaxaca from which the CRM accepted opinions to issue the certificate of Denomination of Origin.

So that producers could have other options for the verification of their distilleries, the elaboration of clinical analyzes and the certification of the drink, in their own mezcal states or near their production centers, and could reduce costs and waiting times for Its results, the federal Ministry of Economy (SE) approved between 2017 and 2018 the operation of other organizations that carry out these tasks.

In Michoacán, it authorized the provision of mezcal verification services to Verification and Certification companies PAMFA, the Verification Unit of the Michoacana University of San Nicolás de Hidalgo (UVEM), as well as the Center for Innovation and Agrifood Development of Michoacán (CIDAM). In Oaxaca, it authorized Extracta Laboratory for Analysis and Quality Control.

Luz María Saavedra is a Michoacan mezcal producer associated with CRM; In 2019, he went to the UVEM to comply with the verification procedure required by the council to certify his drink, but the opinions issued were not accepted on the grounds that there was no collaboration agreement signed with the UVEM, a procedure that is not required, in accordance with the Federal Law on Metrology and Standardization. In 2019, the Extracta laboratory in Oaxaca was also blocked by the CRM, under the same argument.