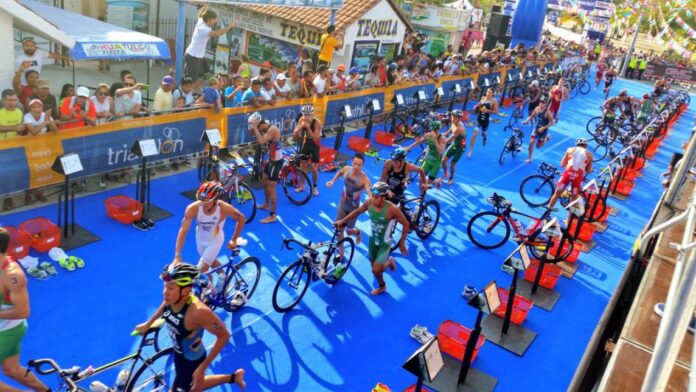 After staying for four consecutive weeks at a green traffic light, which indicates a low level of epidemiological risk in the framework of the health contingency, the state of Oaxaca is making progress in the economic reactivation in sectors such as construction, tourism, commerce, and recreation.

For the second consecutive year, the entity appears on the list of Oscar-nominated destinations in the tourism industry: the World Travel Awards, an award that recognizes the excellence of the sector and encourages a greater influx of visitors to the entity. This has been possible thanks to the fact that the State Government developed health security protocols in a timely manner to prevent COVID-19 infections.

These timely actions have allowed Oaxaca to recover events of international relevance such as the World Cup and the AsTri Huatulco Triathlon, to be held on June 12 and 13, suspended in 2020 due to the health contingency of COVID-19.

This traditional sports event in Huatulco will give valuable points for triathletes who aspire to qualify for the Tokyo Olympics and will qualify for the 2022 Sprint and Olympic World Championships.

The economic reactivation of Oaxaca has also been promoted with strategic infrastructures construction projects, such as the coastal highway 200 Huatulco-Puerto Escondido, the Álvaro Carrillo Cultural Center, and the City Bus; in addition to the mega projects carried out in coordination with the Government of Mexico such as the highways to the Coast and the Isthmus and the Interoceanic Corridor.

The IIMSS reports that in February of 2021, in Oaxaca 1,125 new formal jobs were generated with a growth of 0.5% compared to the previous month and places the entity in the eighth place nationwide in the growth of total employed personnel in wholesale trade.

According to the quarterly indicator of the state economic activity of INEGI, Oaxaca registered a growth of 4.5% in the fourth two-month period of 2020 compared to the same period of 2019.

To date, Oaxaca has received 994 thousand 645 vaccines in 27 deliveries from the pharmaceutical companies Pfizer Biontech, AstraZeneca, CanSino Biologics and Sinovac Biontech Ltd to immunize medical personnel and cover vaccination schedules for adults over 60 years of age, for people over 50 to 59 years and pregnant women over 18 years of age.

In addition, the entity successfully concluded the vaccination process for education sector personnel, who from April 27 to May 2 were vaccinated with the biological CanSino, a total of 108 thousand 615 teachers, administrators and support personnel working in the sector. public and private educational.

TUXTEPEC, After the first round of the Chinantla will take place, a circuit promoted by the group of cyclists, the children of the Chinantla, where different communities in the region were visited, the organizers promised to carry out the second edition next year.

After the good acceptance that this activity had among the participants, the group expects that the second edition will be carried out in a better way.

Berna Luis, Coordinator of the first round for the Chinantla, explained that during this first edition around 350 cyclists from the southeast of the country participated.

During the circuit, about 80 kilometers were traveled around the heart of Chinantla, passing through the municipalities of Santa María Jacatepec and Valle Nacional.

The tour lasted about six to seven hours, with a good response from the participants, who from very early met in the center of Valle Nacional and from there to different points.

“There was a recreational route full of brotherhood, solidarity and cycling camaraderie.”

According to Magaña Velez, after concluding the event, the same participants encouraged them to create a commitment to carry out the second round of Chinantla. Although at the moment there is no date, this activity is expected to take place every year.

“We hope and we are sure that it will be better than the first one, if a minor was given, this time it will be corrected.”

He emphasized that this was the first massive event to be held in the Papaloapan Basin, in addition to the positive opinions, comments, and messages received about the activity.

“Apart from the participation of all fills us with gratitude, we cannot say more than thanks and congratulations to all those who completed the 80-kilometer challenge.”