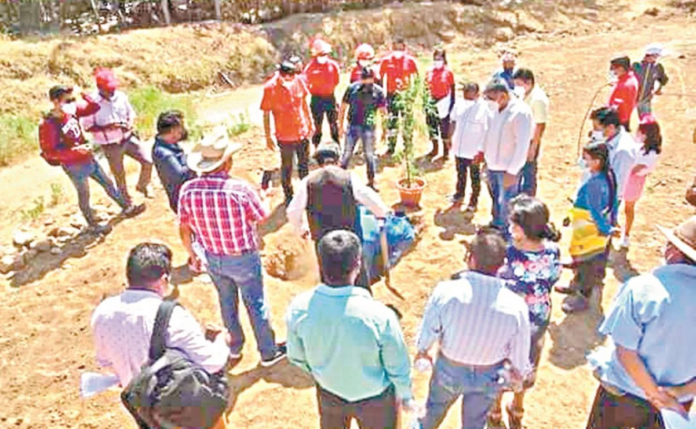 With these actions they seek to avoid a strong dry water problem for the population of Xoxocotlán, and to reverse the effects of garbage and sewage; their method can be implemented for any tributary in Oaxacan territory, they affirm

Oaxaca de Juárez.- Faced with the danger that the water begins to dwindle, municipal authorities Xoxocotlán attended the Collective of Environmental Organizations (COAO) to launch a rescue plan for the Nazareno river, which avoids the dry season and revive the affluent affected by the advance of garbage and sewage.

Gerardo Aldeco Pinelo, president of COAO, explains in an interview with EL UNIVERSAL that the rescue project arose four years ago when the residents of that municipality approached the association to raise the problem; however, it is until now, that they are municipal authorities, that they were able to start the plan.

For the rescue of the tributary, visits have been made to the area where the tasks are planned, which covers an area of ​​five kilometers. “If the tributary is not rescued, over the years the inhabitants of the area will face a problem of severe low water,” says the environmentalist.

The method to rescue the rivers, he emphasizes, can be implemented for any tributary that is in Oaxacan territory; However, despite the fact that the project was presented to the previous Environment Secretaries, Samuel Gurrión and José Luis Calvo Ziga, it was rejected.

“What we did was approach the municipal authorities of Xoxocotlán to show them the project and raise the problem of invasion of individuals that exist in the area, as well as open-air drainage, where sewage is discharged from trails and farms”, details the president of the COAO.

As a guide, the group has a decalogue that describes the actions that are useful to be able to rescue the tributary, which was presented to the authorities of Nazareno, Arrazola, and San Javier, agencies of Santa Cruz Xoxocotlán that house more than 3,500 residents, who face the fear of running out of water.

The tours have been carried out in coordination with the Secretariat of the Environment, Energy and Sustainable Development of Oaxaca (Semaedeso), whose staff has verified that the wells from which water is extracted for human use generate around two liters per second, while, on average, eight should be generated.

The problem was also raised with the National Water Commission (Conagua), in coordination with the authorities of Xoxocotlán, who expressed their willingness to provide means and machinery to start the river rescue plan; however, the agency rejected the project, arguing that the resources are used for emergency situations, such as floods.

Despite this, the rescue actions continued by the municipal agencies interested in it and, as a first action, a child of the Tule tree was planted in the vicinity of the river.

In this regard, the Institute of Nature and Society (Inso) specifies that the presence of roots in tributaries, through reforestation on the banks of rivers, can contribute to the filtration of water, especially if it has been subjected to contamination. Therefore, it is proposed that the entire area be reforested with endemic tree species that perform this function.

The second action will be carried out in the next few days and it is about cleaning the river, in a day in which solid waste will be removed from it.

“The intention is that in the five kilometers there is even a small bike path in the safe part of the river. After the inspection, we found that the tributary does not run water in times of drought, so it would be a viable measure ”, details Aldeco Pinelo.

During the tours, municipal authorities, the state agency and the organization have found that the river has wet soil and there are even water pipe companies that come to extract the liquid to trade it.

The investment to carry out the rehabilitation of the five kilometers that the project contemplates requires approximately of one million pesos. While the communities that participate in the rescue plan would contribute labor through tequio.

The COAO president says that river sanitation is just one of the measures that could be implemented at the state level to deal with low water levels, since currently four out of 10 Oaxacans face water shortages on a daily basis.

The outlook, he says, is serious, but reversible. The annual study conducted by the World Resources Institute (WRI) indicates that Mexico is the 24th country in the world with water stress, indicating that there is a severe water crisis.

At the national level, the indicators indicate that Oaxaca is at a healthy level in terms of water availability; However, the specialist points out that in urban areas scarcity is increasingly recurrent, while in rural areas, where there is more abundance of water, there is no infrastructure to make it accessible.