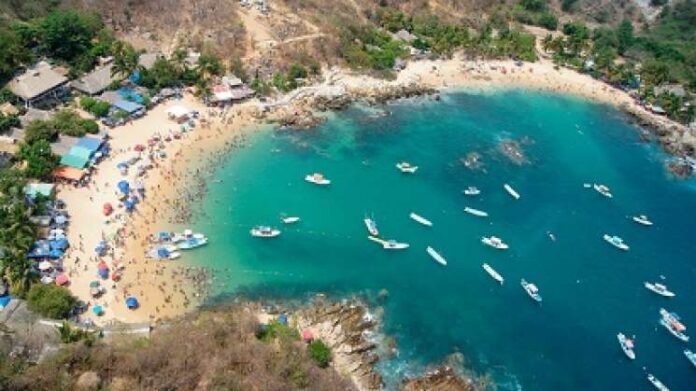 In town hall sessions, four municipalities on the coast determined to abide by the orange traffic lights in the face of contagion risk, and each one established the operating rules for this holiday season

Juchitán de Zaragoza.— On the occasion of the Easter holiday period, authorities of the main beach tourist destinations in Oaxaca announced that tourist services will be able to operate between 50% and 70% of their capacity, under pandemic restrictions.

This information was released by municipal authorities of San Pedro Mixtepec, Santa María Colotepec, San Pedro Pochutla, and Santa María Huatulco; After the state governor, Alejandro Murat Hinojosa, reported that it will be the councilors of the municipalities of the beach destinations who decide if they are closed to the public during the holiday period, given the risk of Covid-19.

In council sessions, each of these four municipalities on the Oaxaca Coast determined to abide by the orange traffic lights due to the risk of contagion.

They considered that due to the decrease in cases and deaths due to the disease, this opening would be given to tourist services, but they agreed that the saturation of hotels and restaurants should be avoided, and parties, mass cultural, sporting and political events are also prohibited.

The municipality of Santa María Huatulco is the only tourist destination that allows capacity in its spaces up to 70% from March 29 to April 4, after that date services must be reduced to 50%, from April 5 to April 11. April.

Both in the municipal seat as well as in the beaches of Santa María Colotepec such as Zicatela, Punta Zicatela, Playa Principal, the restaurant and hotel occupation will be at 50% with all sanitary measures, the holding of massive events in public, private spaces is prohibited and beach, in addition to being prohibited wedding parties, XV years, baptisms, confirmations and any celebration that involves crowds.

In the same way, they pointed out that clandestine parties are prohibited, and the sale of alcohol between 12 at night until 10 in the morning.

In the municipal capital and beach destinations of San Pedro Pochutla, such as Puerto Ángel,  Zipolite, San Agustinillo, the hotel and restaurant occupancy is 50%, the alcohol sales service in stores will be only to take away, in addition to the parties and massive events are still canceled.

In San Pedro Mixtepec the determination is the same, in Puerto Escondido, its main beach destination, the use of face masks in public spaces is mandatory, mass events, parties are canceled, and the beaches are open to national and international tourism.