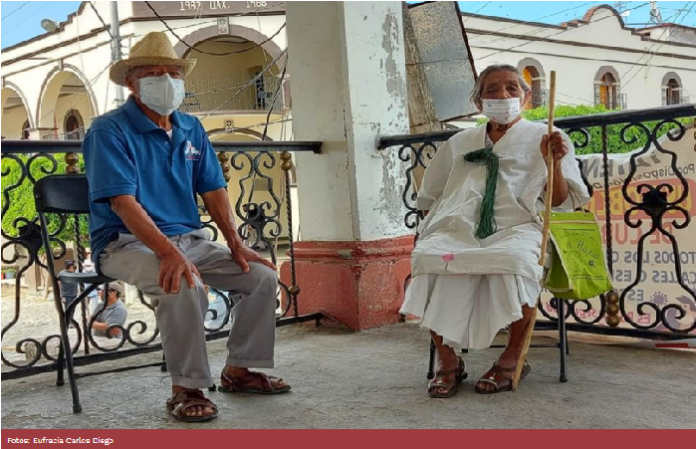 Oaxaca de Juárez.– The vaccination against Covid-19 this Tuesday reached less than a hundred older adults in Villa Hidalgo Yalálag, a community in the Sierra Norte de Oaxaca inhabited by the Zapotec people that stands out because so far, more than One year after the pandemic reached the state territory, it remains without a single contagion, so the vaccines arrived first here than the virus.

The vaccination day in this Zapotec community began early this Tuesday, at 7:30 in the morning, and will be carried out throughout the day, with the corresponding sanitary measures, says Juan Cuevas Ríos, the municipal president, in an interview. According to the mayor, from Monday they went to Tlacolula de Matamoros for the vaccine doses, along with those that correspond to other municipalities such as San Francisco Cajonos, and San Miguel Cajonos, so they were given 390 together to vaccinate a just day.

Of that total dose, 90 are needed and correspond to Yalálag and with them the total of older adults in the community will be covered, which has the authorities optimistic.

“We are happy because we hoped that we would all get vaccinated,” emphasizes the municipal president.

The joy of the Yalálag authorities is due to the fact that these Zapotec people are recognized as one of the indigenous communities of Oaxaca that has managed or contained the pandemic and prevented it from entering their territory.

Although officially the Ministry of Health of the federal government indicates that two infections and one death have been registered here, the mayor assures in an interview that in all this time they have not reported a single case in the town, and neither that any person has lost their lives due to the disease, so with the arrival of vaccines they are keeping hope high.

To achieve this, Yalálag maintains a sanitary filter at the entrance of the town, which can only be accessed by people from the community and neighboring towns, postal staff, and doctors. Yalaltecos living within the Mexican Republic have access denied. to prevent contagion.

This Friday, in addition, it was the nurses of this community, as well as those of its neighboring towns, who applied the doses of the Sinovac pharmaceuticals, while a doctor watched that the elderly did not have relations; In addition, elements of the National Guard were who were guarding the community clinic during the night, where the vaccines were kept.

The group in charge of receiving the doses was made up of the municipal president himself, the health councilor, two assets of the National Guard and an official from the welfare office.

In the Sierra Norte region there are several communities that, thanks to the fact that they have remained isolated and with sanitary filters, have prevented the virus that paralyzes the world from reaching their inhabitants.

Yalálag, for example, is surrounded by other municipalities such as Mixistlán de la Reforma, San Pablo Yaganiza, San Francisco Cajonos, and San Melchor Betaza, which according to the federal government has only reported one contagion, respectively, as well as other communities such as San Mateo Cajonos, San Baltazar Yatzachi el Bajo, San Bartolomé Zoogocho, San Andrés Yaá and Santo Domingo Roayaga, which have so far not registered a single case, while the vaccination process advances.