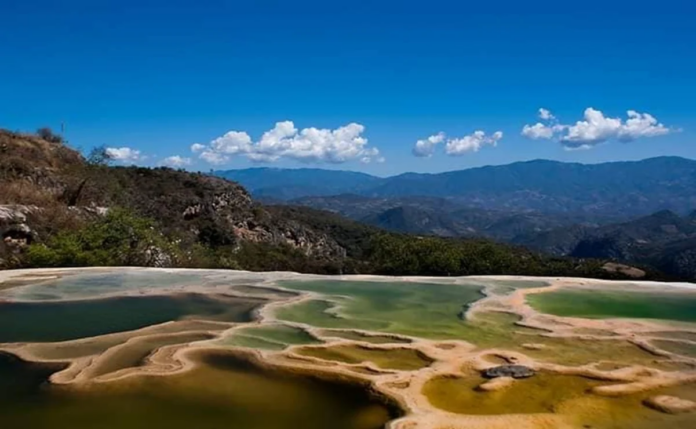 Residents of this municipality accused that historically all the economic benefits left by the exploitation of this tourist destination that is on their land, they monopolize travel agencies and political groups

Oaxaca.-  Authorities and residents of the municipality of San Lorenzo Albarradas announced that access to Hierve el Agua will be definitively closed due to the risk of violence, which prohibits the passage of all types of tourists, national and international.

In a press conference, the residents of this municipality of the Central Valleys of Oaxaca accused that historically all the economic benefits left by the exploitation of this tourist destination that is on their land has been monopolized by travel agencies and political groups.

It was because of this that they decided that the site would be permanently closed and with it, anyone who entered the place without authorization would commit a crime since they claim that after litigation and trials, they were recognized as the legitimate owners of the land.

“Other residents outside the Ejido were granted possession of the plot (where Hierve el Agua is). We have won various agrarian and protection lawsuits where possession and ownership of the plot have been reinstated. Hence the decision to close access to this tourist destination “, they declared. They accuse compadrazgo in the case of Hierve el Agua

They accused that there is cronyism and political protection, as well as decided by the state authorities, which allows politicians such as Manuel Pérez Morales and Jorge Franco “Chucky”, who was Secretary-General of the Government in the administration of Ulises Ruiz Ortiz.

They accused that the government prefers to have “a bloodbath” rather than address the problem, so they said that to avoid those circumstances they made the decision to close.

“We have decided to close the community and definitely the access to tourism. To avoid an outbreak of violence (…) No one from tourism will be able to access, national or foreign, definitely ”.

The residents added that all those who enter Hierve el Agua without authorization will be detained by the municipal authority , as it is finally raiding the private property. “The corresponding legal processes will be opened if they do not understand the notice that is being given that there is no access.”

The above, because they assured that it is the same as entering a house to which you have not been invited, when entering you would be committing a crime.

“It is the same in the Ejido, the people belonging to the Ejido may continue with their normal activities in the communities, simply national and foreign tourism is prohibited access.”

This decision to close the access to Hierve el Agua was previously announced by the agent of San Isidro Roaguía, Marcos Martínez Grijalba, who also warned of the risk of violence but before the threat of the agrarian and municipal authorities of San Lorenzo Albarradas to close the passage and not giving access to tourists.

Martínez Grijalba said that these threats were made by the lawyer of the San Lorenzo Albarradas Commissariat, Eder Salinas Cortés, after the community of Roaguía won a trial in which they demanded the delivery of their municipal shares.

In addition, he described as illegal the checkpoint that the authorities of San Lorenzo Albarradas have maintained for several years, where they charge for letting go.

In 2017 the community began a legal process before the Indigenous Chamber of the Superior Court of Justice, for the San Lorenzo Albarradas municipality to deliver the shares that correspond to Roaguía, because since it was recognized more than 20 years ago as an agency, the municipal authority has never I gave them no participation

A year later, the Indigenous Chamber agrees with Roaguía and orders the delivery of the shares immediately, but the municipal authority filed an appeal.

The agent demanded that the authorities guarantee and immediately enforce the resolution of the Indigenous Chamber in the sense that they hand over their resources, and that the necessary measures be taken to avoid a confrontation in the face of threats of a violent incursion into the Hierve el Agua area.

Consulted by EL UNIVERSAL, Segego reported that the Agrarian Conciliation Board is intervening on the issue given the nature of the conflict between the two communities.