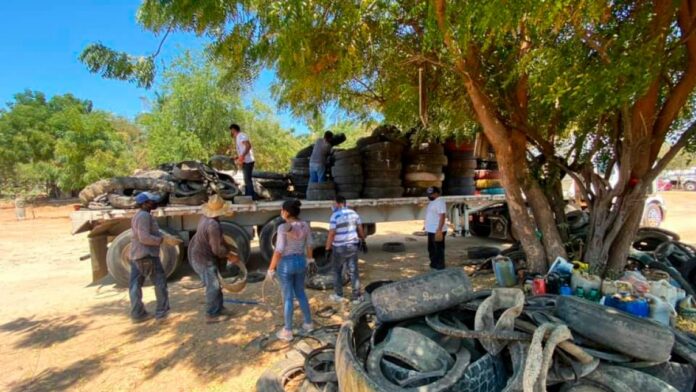 PUERTO ESCONDIDO, Oaxaca.- More than five tons of tires were collected in the first campaign of this type carried out by the municipality of San Pedro Mixtepec at the invitation of the Ministry of the Environment, Energy and Sustainable Development (Semaedeso), which will serve as fuel for the fifth incineration furnace inaugurated by the Cruz Azul cement plant, explained María Jessica Santos Reyes, coordinator of Ecology of this municipality.

The coordinator, a biologist by profession, highlighted, among other benefits, that eliminating tons of tires and their waste contributes to reducing breeding sites that favor the reproduction of the Aedes aegypti mosquito, which transmits dengue, Zika and Chikungunya

He added that most of the time they went to private homes to collect the tires, with the support of the management of Playas Limpias, and that two companies in this area sent their material to the collection point, located next to the access to Puerto Angelito.

Santos Reyes mentioned that this material is considered a “waste of special handling” and the municipality does not have the permission of Semaedeso for its treatment; He added that tires take more than 500 years to degrade, but instead of disintegrating they become microplastics that could contaminate waterways, enter the food chain and subsequently cause harm to humans.

He pointed out that this initiative, which is beneficial for the health of people and the environment, was replicated in the municipalities of San Pedro Pochutla and Santa María Huatulco, and previously in some municipalities of Valles Centrales.

As for the used cooking oil collection campaign, which began this Thursday and could extend until this Saturday, the Ecology coordinator said that it is a pollutant of daily use that also negatively impacts bodies of water and requires special handling.

He mentioned that they intend to collect two thousand liters of used cooking oil to be transformed into biodiesel and they installed a collection module at the access to Puerto Angelito; If you have more than 10 liters of used oil, they will collect it at home.

Finally, regarding its negative impact, he explained that studies indicate that one liter of oil can contaminate up to four thousand liters of water or more; This depends on specific variables and he said that when poured into pipes, fats solidify and clog them, causing different complications that can affect the community.