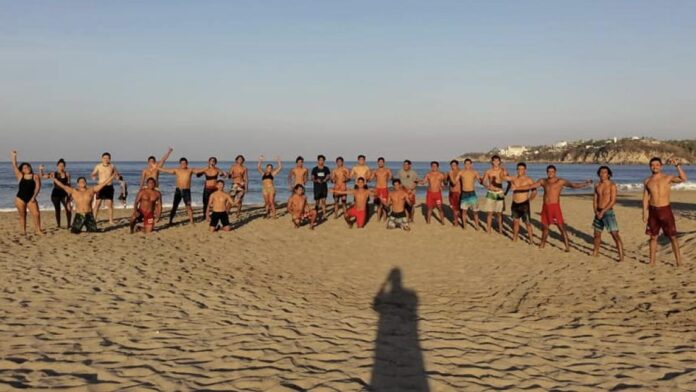 Upon completion, backup lifeguards would be chosen

PUERTO ESCONDIDO, Oaxaca.- The training for lifeguards and candidates who aspire to be backup lifeguards began in Zicatela beach, with more than 20 athletes enrolled in this course that takes place, every year, prior to the Easter season (Semana Santa).

The training for the rescuers of this destination began last Monday and for 10 consecutive days, they will train from 6:30 in the morning, for two hours, indicated the coordinator of the lifeguards, Godofredo Vásquez Bohórquez.

He mentioned that there are three female surfers among the participants and that one of them intends to be a backup lifeguard to support the surveillance tasks that will be carried out during the next season.

Godofredo explained that all the participants are from Puerto Escondido or reside in this city and that 8 members of the Tritones swimming club signed up, as well as surfers, boogie borders, as well as triathletes were interested in taking this training given its level of rigor. For the official lifeguards, meanwhile, he said that it is mandatory.

He added that the training consists of running and swimming feeling the pressure of time and peers, in addition to doing a lot of cardio exercises, with sprints in races and swimming, and near the end of the course they see first aid techniques.

The rescuer explained that the maximum effort they make is when entering and leaving the sea, that is why the aforementioned exercises are done by adding weight to certain parts of the body, which is called running and swimming “with resistance”, they also do apnea, which is holding the oxygen down the water and bodysurfing and when you come back to the beach is how to avoid the return currents.