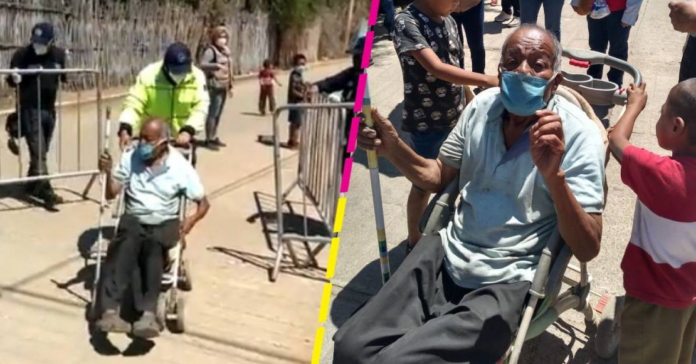 This is just one of the postcards left in Oaxaca by the vaccination process that continued this Saturday in municipalities such as San Isidro Monjas, Xoxocotlán

Oaxaca de Juárez.— “Great tenderness and compassion generated this scene. In an old baby stroller fitted as a wheelchair, a boy no more than 11 years old took his grandfather to get vaccinated. With all his little strength, he would push the stroller to get to the vaccination post ”.

With these words, through her social networks, the Oaxacan journalist Paulina Ríos documented the story of a small native of San Isidro Monjas, who at just  11 years old took his 75-year-old grandfather to be vaccinated.

With a series of photos, the journalist accompanies the story in which the minor, as well as his seven-year-old brother, took their grandfather to vaccinate in a stroller enabled as a wheelchair.

After spreading the story, several Twitter users shared it and there were even those who offered to donate a wheelchair, as the children reported that there was no one else who could take their grandfather to vaccinate.

This is just one of the postcards left in Oaxaca by the vaccination process that continued this Saturday in municipalities such as Santa María Atzompa, Xoxocotlán, where the children of history belong, and Santa Lucía del Camino.

In the latter, one of the towns where the vaccination day was suspended, because the doses arrived late, the anti-Covid-19 vaccines were exhausted at the headquarters located at the IMSS clinic 65.

In a tour carried out by EL UNIVERSAL, it was found that people in charge of logistics collected the rental furniture at the place arranged for vaccination, despite the fact that according to the logistics they still had to apply vaccines this Sunday.

According to the police in charge of surveillance in the area, those who came to ask were informed that there were no more vaccines and they had to be aware of the instructions of the colony chiefs.

In contrast, through his social networks, the mayor of Santa Lucía del Camino, Dante Montero Montaño, who protested to demand the vaccines, urgently called the inhabitants of seven colonies in that municipality such as Refugio, Residencial Santa Lucía, Nueva Santa Lucía, and Bosques Sur, where the doses would be applied tomorrow, to go to the San Francisco Tutla headquarters to access one of the vaccines that were not used in the population.

In the morning, Governor Alejandro Murat and the General Coordinator of Programs for the Development of the Government of Mexico, Gabriel García Hernández, supervised the vaccination process against Covid-19 in the municipalities of Santa María Atzompa and Xoxocotlán.

After the story of the man, identified as Víctor, and his grandchildren went viral, the city council of Xoxocotlán, through the municipal DIF, gave him a wheelchair and enrolled him in the Municipal Food Support Program, reported Alejandro López Jarquín, the municipal president of Xoxocotlán.

Of course, we were all very moved to see the image and learn the story of these two children and how they managed to take their grandfather to vaccinate with the help of a stroller. However, not only to see the way in which these little ones did their best to take care of their grandfather but also because the case is a reflection of the difficult situation that millions of Mexicans live in the most remote areas of our country.

Fortunately, this story has a happy ending, because according to El Universal, the City Council of Xoxocotlán (municipality of Oaxaca where the grandparents live with the two children) gave him a wheelchair through the municipal DIF.