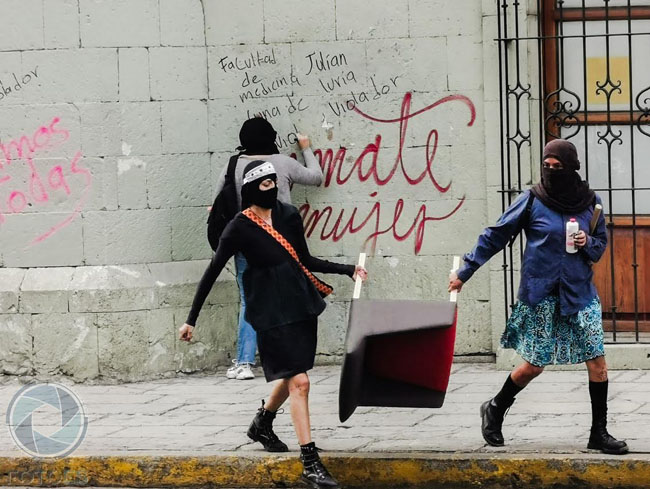 Feminist organizations marched this Sunday in the framework of International Women’s Day.

Oaxaca, Oax.- Feminist organizations marched this Sunday within the framework of International Women’s Day, which is commemorated every March 8, leaving behind broken glass and paint in various public and private buildings.

Under the slogans “Justice!”, “No more aggressions!” and “Not one more aggressor in power!”, the women left the Francisco I. Madero park and walked along the Madero road, entered Independencia street, and ended in the Zócalo of the city of Oaxaca.

The march was led by relatives of murdered, attacked, and disappeared women, among them the journalist María del Sol Jarquín Edgar, mother of the murdered photojournalist, María del Sol Cruz Jarquín.

During their journey that began on the Madero road, the protesters used hammers, sticks and stones to damage glass doors and windows, in addition to defacing the facades of churches, shops, offices, and bank branches.

As they marched on Independencia Avenue, in the Historic Center of the Oaxacan capital, the women made a stop in front of the San Felipe Neri church, where they shouted various slogans.

A group of young people stopped at the church of San Cosme y San Damián, wherewith the help of sticks they broke the wooden doors and entered to vandalize the place, taking out one of the benches to set fire to the street.

Likewise, they smashed the windows of the building of the Oaxaca Health Secretariat (SSO), from which they took documents to burn them.

With these actions, the protesters called for the creation of the State Search Commission to find the disappeared women in Oaxaca, as well as actions to stop femicide violence in the state.

During the journey, this group of women painted and broke glass on the facades of businesses and private homes.

They detailed that in the country 10 women are murdered daily, while in Oaxaca, 232 women were murdered in 2020, and more than 500 in four years.

In addition, they noted that economic and femicidal violence hardened during the pandemic, resulting in almost 3 femicides per day.