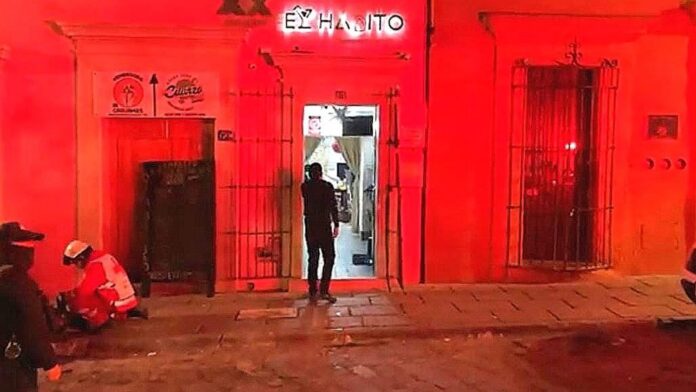 The female died hours before the arrival of the emergency bodies, who also treated a man wounded by a bullet; there is no information on the aggressors

A young woman was killed by a gunshot inside a bar located in the Historic Center of the City of Oaxaca; the event also left a man injured by the detonations.

The events were recorded at 3:25 am this Sunday, November 21, at the “El Hábito” establishment located on the capital’s tourist walkway, on Allende Street, a few meters from the Santo Domingo de Guzmán temple.

It is still unknown if the incident was a direct attack, however, theories strongly suggest that the death was the result of a stray bullet.

Unofficial versions relate, on the one hand, that the unfortunate death occurred after the irruption of an armed group to the establishment that resulted in discharges of firearms; the mortal victim would have been hit in the head.

However, according to ioaxaca, other witnesses assured that it was a single young man who perpetrated the attack minutes after he was forced to leave the place for violent behavior against security personnel.

After that, they mention, the subject would have returned armed to shoot from outside the place, which he managed to re-enter after the withdrawal of the elements that were guarding the entrance.

The gunshot wound left the woman in serious condition, taking her life long before the Red Cross emergency services arrived. It was unofficially identified that the victim was Jazmín “N”, between 20 and 25 years of age, who was a resident of the metropolitan municipality of Santa Lucía del Camino.

Elements of the State Attorney General’s Office (FGE) arrived at the site to start the corresponding proceedings, however, the body has not yet issued an official report on the events.

The Secretary of National Defense ( Sedena ) pointed out that 10,427 high-impact crimes have been reported in 2021,  placing Oaxaca in 14th place in intentional homicides nationwide. He explained that the municipalities with the highest crime incidence, which correspond to those with the most inhabitants, are  Oaxaca de Juárez,  Juchitán de Zaragoza and San Juan Bautista Tuxtepec.