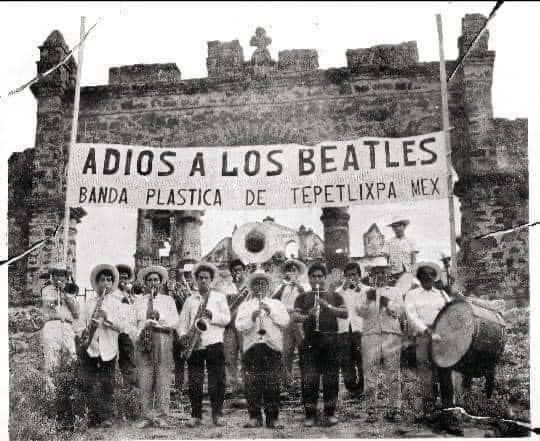 It is said that at the end of 1969 some members of The Beatles (it is not known with certainty if it was John and Harrison OR John and Paul) arrived in Mexico and traveled to Oaxaca to meet the shaman María Sabina and try some of her hallucinogenic mushrooms and curatives.

Shortly after that event, a regional band appeared by the name of La Banda Plástica de Tepetlixpa, performing popular songs by The Beatles. According to José M. Silva, director of the band, he says that during the journey to Oaxaca, in that municipality they offered the Beatles mole, pulque, nopales, and tortilla chips as part of a reception.

To date, there is only this photo and this humble testimony of some residents who claim to have seen a couple of the members of the Liverpool quartet in that area, but other than that there is no evidence of that visit of the Beatles to our country.

Whether this supposed visit to the Beatles is true or false, it is worth listening to this album at least once, it may not be one of the best tributes made to this group, but you can feel the humility and affection with which it was made, in addition, that it is very interesting to hear how they adapted the songs to the regional / folk genre of our country.

I recommend you listen to this album at least once, to feel the passion, humility, and affection with which it was… made.