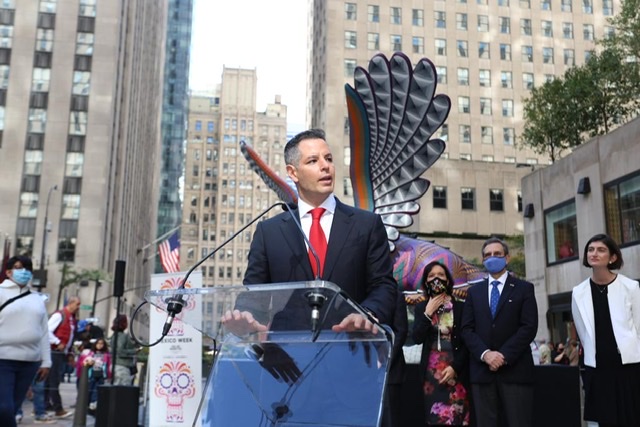 The giant alebrijes placed in New York’s Rockefeller Center are the work of Oaxacan artisans Jacobo and María Ángeles, from San Martín Tilcajete

New York.- “I want to tell you that I am very grateful since Oaxaca has a purpose that we like to summarize in one sentence: we want more Oaxaca in the world and more of the world in Oaxaca. And by being here at the Rockefeller Center in New York, unveiling these alebrijes and starting this festive day of economic and cultural promotion, we know that we are achieving that purpose, ”said Governor Alejandro Murat Hinojosa when presenting the works of Oaxacan artisans Jacobo and María Ángeles, placed in the emblematic Rockefeller Center of this city.

With this activity, the State President began the activities of the “Month of Oaxaca in the United States”, a space for economic and cultural promotion carried out in coordination with the Mexican ambassador to the United States, Esteban Moctezuma Barragán, with the aim of accelerating the reactivation of the entity by attracting investment and tourism.

“In Oaxaca, everything is done with the soul, because in our land the spirit dances, paints the spirit, cooks the spirit, writes the spirit,” said the State President together with the honorary president of DIF Oaxaca, Ivette Morán de Murat; Rockefeller Center CEO EB Kelly; the consul general of Mexico in New York, Jorge Islas López, and dozens of New Yorkers who gathered here to marvel at Oaxacan creations.

While thanking the permanent representative of Mexico to the United Nations, Dr. Juan Ramón de la Fuente, for the efforts in favor of the people of Oaxaca, the State President highlighted that the presence of Oaxacan culture in the heart of one of the most important economic and cultural capitals of the world shows that the entity is ready to build bridges of collaboration with all nations, to work for development and equality throughout the world, but especially among indigenous peoples.

In his opportunity, the Mexican ambassador to the United States, Esteban Moctezuma Barragán, highlighted the natural and cultural greatness of Oaxaca, which is why it has become one of the most solid pillars of Mexican identity that makes us recognizable and admired. in the rest of the world.

For her part, the general director of Rockefeller Center, EB Kelly thanked the Government of Oaxaca and the Consulate General of Mexico in the United States for making possible the presence of the “Monumental Guardians” at Rockefeller Center, thereby consolidating the role of this emblematic space as a headquarters for the cultures of the world.

It should be noted that the presence of the alebrijes of Oaxaca in New York City is possible thanks to the event “Mexico Week: Día de Muertos at Rockefeller Center” promoted by the Consulate General of Mexico in New York, through its cultural institute.

Also participating in the event was María Fernanda Garrido, Consul for Economic Affairs.