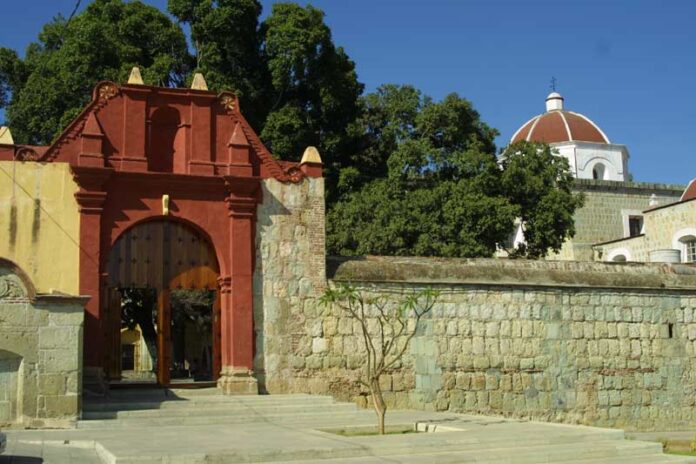 Until a couple of days ago, tenants of the November 20 market protested the construction of the Real Alhóndiga, which until then was thought to be the center.

Oaxaca de Juárez.- Guillermo Gonzáles León, head of the State Cultural Heritage Institute (Inpac), announced that the architectural project of the Oaxaca Gastronomic Exhibition Center will be carried out as a “contemporary insertion” in the Ex-Convent of the Discalced Carmelites and not in the Real Alhóndiga de Antequera, as it was originally planned.

Until a couple of days ago, tenants of the November 20 market, which is located a few meters from the property, in the Historic Center of the City of Oaxaca, protested against the works of the Real Alhóndiga, which until then was thought to become in said center.

The merchants consider that the gastronomic center project undermines traditional markets, against the cultural identity of the state and that it will also affect the economy of small merchants.

However, in the statement released this Wednesday by Inpac, its owner, Guillermo Gonzáles, points out that the Gastronomic Exhibitor Center of Oaxaca, in its new location, will be a cultural infrastructure that will serve as a museum and academic site, which it will seek to protect and disseminate the intangible gastronomic heritage of the state.

“This Center does not replace the culinary tradition of which the Oaxacan families who work in our traditional markets, dining rooms, or restaurants are the guardians. Rather, their goal is to honor this tradition. It is a place where both Oaxacans and tourists will be able to get to know in-depth the elements that make our culinary culture-rich and value it better, ”he said.

The work will remain in the center of the state capital, but now a few meters from the Temple of Santo Domingo de Guzmán; the authorities detailed that the construction is intended to become a “high-level” tourist attraction.

The project, planned in April 2019 to be built in the Real Alhóndiga de Antequera, had as its main objective “to offer an alternative for the rescue of traditional and indigenous Oaxacan cuisine”, according to the official document published by the Ministry of Tourism in back then.

Over time, the authorities reported more details, such as the participation of the Alfredo Harp Helú Foundation, which will invest in this work, with a cost in its first stage of 50 million pesos; This sum is part of the investments contemplated in the debt that the State Congress approved at the request of Governor Alejandro Murat.

“With the Gastronomic Center, the state government, through Inpac, fulfills the task of protecting and preserving the tangible and intangible heritage of Oaxacans, because it will be located in the heart of an important historical site of our capital, “said the head of the institute.