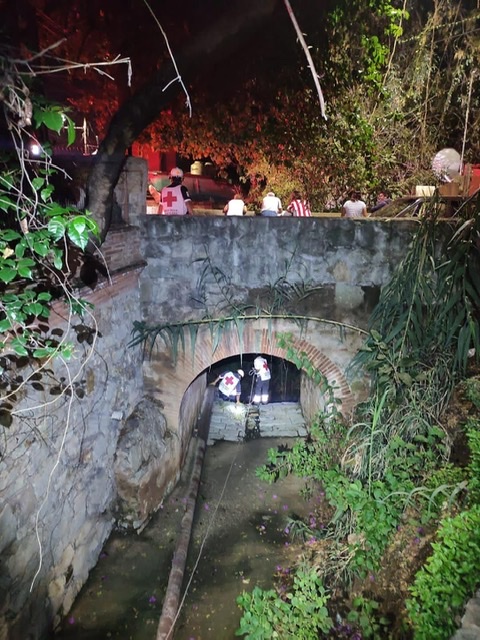 Oaxaca, Oaxaca. – A woman was seriously injured after falling from an eight-meter-high bridge in the Xochimilco neighborhood, belonging to the municipality of Oaxaca de Juárez.

The events occurred over the weekend when the affected woman was walking in the company of her partner, at the entrance of this neighborhood located in the north of the city.

Both were reportedly intoxicated, so when getting too close to the edge of the bridge, the woman slipped and fell from a height of eight meters, resulting in injuries to various parts of the body.

It was his companion who asked for the support of the neighbors to alert the emergency bodies.

Personnel from the Mexican Red Cross arrived at the scene and rescued the woman, who lost consciousness due to the strong blow.

The woman was transferred to a private clinic to receive emergency care, while elements of the Municipal Police learned of the events to define responsibilities.

The Xochimilco aqueduct is one of the emblematic spaces of the city of Oaxaca.

The founding of Xochimilco is prior to that of the city of Oaxaca, since it dates from June 30, 1486, when by orders of the Aztec emperor Ahuízotl, a detachment of Xochimilca soldiers cut down part of the gourd forest that was in the Cerro del Fortín, and it was formally established there where Tecatetl ruled from 1486 to 1506 until the arrival of the Spanish in 1521.

In Zapotec the hill was called Daninayaaloani (Cerro de la Bellavista) from where you can see the confluence of the three central valleys; Etla, Zimatlán and Tlacolula. The Nahuatl name of Huaxyacac ​​(on the nose or tip of the gourds) is the first one that Oaxaca obtained, which undoubtedly corresponded to the Cerro del Fortín, an area that formerly belonged to the Xochimilco neighborhood.

The descendants of the oldest inhabitants of the current neighborhood tried to maintain autonomy with respect to their nearby settlements, they continued to marry each other, so there are still physical types different from the Zapotec type among the neighbors. Its name, in addition to remembering its Aztec origin, was well applied considering that wild lilies were abundant.

The town of Xochimilco lost its autonomy as such, by Decree of May 19, 1926, together with Jalatlaco and La Trinidad de las Huertas, becoming a conurbation with Oaxaca, joining the current Municipality of Oaxaca de Juárez, with which inhabited parts of the They were considered neighborhoods of the city.

Plan of 1777, Oaxaca City. In this plane, you can see the city of New Spain surrounded by the indigenous peoples of Xochimilco to the northwest, Jalatlaco to the east, and the marquisate to the west along with Chapultepec.

Something characteristic of the Xochimilco neighborhood is the aqueduct made of the green quarry that crosses it, this comes from the water intake of the San Felipe springs to the final distribution box of the city, located in the south-west corner of the temple of the Carmen Alto.

Its construction was financed by Juan G. Márquez, Manuel Landeta, José Sánchez Pascuas, Juan de Pascua and O’brien, beginning in 1727 and culminating in 1751. This colonial work had a great function in its time, improving the conditions of the population, increasing the services in temples and monasteries in the seventeenth century, public fountains, and gardens.

To preserve its necessary slope to the passage of water, the aqueduct had to be raised on an arcade which was the only procedure of the colonial era, this area was for the highest part corresponding to the waterfall section in which the Xochimilco river crosses, although its The invoice is rough, it is enhanced by the quarry stone typical of Oaxaca.

The aqueduct continued to transport water to the city through an old street that connected the city with the old town of Xochimilco (in the middle of the 18th century) this street today is called Rufino Tamayo, in honor of the great Oaxacan painter, who was born precisely one block from there, at house # 215 on the 2nd street of Cosijopí on August 26, 1899. The section called Los Arquitos de Xochimilco, covers approximately 300 meters in length; It is attractive for its green quarry walls, especially for its semicircular arches of baked clay brick, under which the residents of the neighborhood built the entrances to their houses. At the beginning of the street is the square of the stone cross; in its middle part, there is another square with its fountain and benches from the colonial era.

The deterioration of the aqueduct was inevitable, rendering it inefficient over time. Between 1944 – 1945 a section of the aqueduct was demolished, to obtain direct passage to the Cristóbal Colón highway (today federal highway 190 that leads to Mexico City), cutting off the old town of Xochimilco and a good part of its hamlet that was incorporated into the city. It should be noted that in 1949, during the government of Lic. Eduardo Vasconcelos, at the initiative of Dr. Juan I. Busdamente, the street was repaired with old cobblestones, which were under the asphalt in some streets. In the times of Governor Brena Torres, a collaborator and artist; Carlos Rosas Rueda, made the final arrangement, such as attacking the facades of the houses that were close to the outside to show their thickness, lanterns were placed,

In 1994, with the support of the federal and state government, the aqueduct was rehabilitated by reinforcing the quarry arches which were damaged. Additionally, two squares were built, the “Parque la Cascada and Plaza de Hermandad Internacional” joining both squares by means of paving on the river bed.

Probably one of the neighborhoods that best preserves its traditional customs is Xochimilco, some of its most important celebrations are Holy Week (Holy Tuesday and Friday) the October festivities to the Virgen del Rosario, and the ceremonies of the Raising of the Cross, this at the ninth day of the death of a neighbor.

The feast of Holy Tuesday is dedicated to the Lord of the Three Falls inside the parish atrium, from Palm Sunday and on Tuesday morning a mass is celebrated in honor of the same man, and in the afternoon the traditional free freshwaters for all attendees. It is said that this custom originated because the people of Xochimilco wanted to thank those who arrived fatigued and heated by the ascent from Oaxaca on the hot days of Holy Week for the effort.

The most important festivals in Xochimilco are those of the Virgen del Rosario, celebrated on the third Sunday in October as well as on its nearby days. In this festivity processions of three Virgins are carried out: that of the men, that of the women, and that of the reliquary.

The population of Xochimilco was made up mainly of four trades: 1. Peasants, 2. Weavers who used to make mainly shawls, currently mainly produce tablecloths and bedspreads which have the tradition of the ordinances of the 18th century, which is why they preserve until today great quality on your bill. 3. Adobe, brick, and tile artisans, which still preserves the name of Calle de Hornos. 4. Tinsmiths of whom very few remain today.

It is known that in the past there were 3 indigo and scarlet factories for dyeing cotton threads and 407 rustic looms, of which 50 were for shawls and 357 for soy, perguetillas, blankets, wools, slits, and kerchiefs. Ordinary cotton blankets and pigtails were also woven and tarps were made.