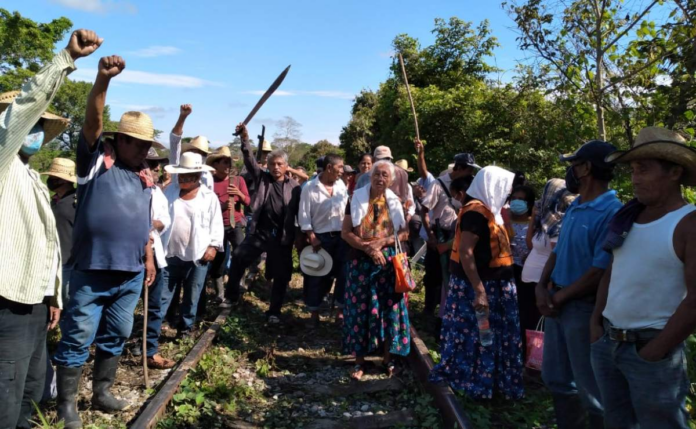 Between 2020 and the first six months of this year, the Ayuuk peasants of Oaxaca have expelled on at least 34 occasions the workers of various companies that won the bids to rehabilitate the train tracks

Juchitán de Zaragoza. — On the morning of this Thursday, some 150 peasants from the Mogoñé Viejo town, which belongs to the municipality of San Juan Guichicovi, once again expelled workers from the Tehuantepec Isthmus Railroad (FIT) and workers from the construction company Hermes, owned by Carlos Hank Rhon, who wanted to start modernizing the tracks of the Trans-isthmian Train.

The works consist of changing the rails and sleepers so that the train can travel at a higher speed; The Trans-isthmus is considered the backbone of the Interoceanic Corridor of the Isthmus of Tehuantepec, one of the flagship megaprojects promoted by President Andrés Manuel López Obrador in Oaxaca.

The representative of the ejidatarios of Mogoñé Viejo, Venancio Francisco Joaquín, explained that both the FIT and the Hermes company, of the La Peninsular Group, which won the tender to modernize 50 kilometers of roads from the Mogoñé to Ubero section, have been expelled from these lands. ayuujk or mixes because they do not ask for permission to enter and have not reported the impact of those works.

A month ago, on May 13 of this year, the peasants of Mogoñé Viejo practically chased the workers of the Hermes company, who were trying to start with the work of changing the sleepers and rails and stopped a truck from that construction company.

Since June 2020, the ejidatarios of Mogoñé Viejo agreed to prevent work on their lands, so that in this section of the road, in the northern area of ​​the Isthmus of Tehuantepec, the progress of the work is zero.

On this occasion, peasants from the Vixhidu town joined the protest against the FIT, which with an investment of just over 3 billion pesos began last year the modernization of just over 200 kilometers of the Transistmian Train tracks, which runs from Salina Cruz, Oaxaca, to Coatzacoalcos, Veracruz

Between 2020 and the first six months of this year, the peasants of the municipalities of Santa María Petapa, Matías Romero and San Juan Guichicovi, have expelled at least 34 times the workers of various companies that won the bids to rehabilitate the roads of train, because they do not ask permission to enter their lands and they do not inform the communities.