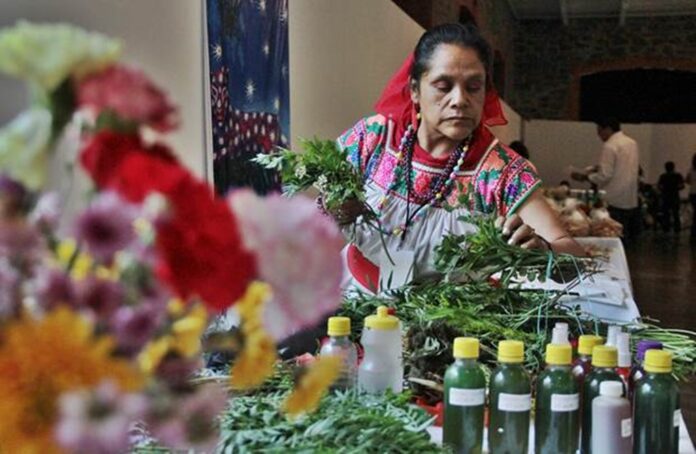 Silvia Gabriela Hernández Salinas uses traditional medicine to heal the pains and ailments of the Oaxacans who come to her office. He considers that traditional medicine is an inheritance of the native peoples because before science was established, the ancestors already had certain notions about how to preserve health, but this issue is not given importance.

He indicated that a traditional doctor must recognize the other living beings that exist in the world, in order to give them the appropriate position in the environment in which they operate, always taking into account the context provided by the environment.

He affirmed that in the Training School of Traditional Doctors for Health Promoters they try to train young people, with whom they share the teachings of plants, always seeing them as an entity with which communication should be privileged.

He considers that traditional indigenous medicine must be rescued, systematized, and used in an appropriate way, since they are knowledge prior to science, so the ancient indigenous peoples already had basic notions about the world, the human being, and the environment.

“In the communities, one is accustomed to the relationship with nature, to the care of plants and then it is like a basic job of all people to take care of their own health, their own body as a territory,” he said.

She declared that it is necessary to have a knowledge of our body, “to recognize processes of nature in us, in us, and that is why it is also accompanied from the simple flu to the flowering of life, which is childbirth, the birth of new beings that come to this world “.

He indicated that a consultation with a traditional doctor in the city and in native communities is different. Well, even in cities, payment for services is implicit, however, the situation is different in indigenous communities, even in relation to treatment.

Hernández Salinas indicated that the COVID-19 pandemic that shook the world, the country, and also Oaxaca, left people with stress, fear, and nervousness. He assured us that the context in which we live marks us since they are teaching processes that allow us to articulate a response to life.

He indicated that COVID-19 also showed an excess of information that exists in society, which does not adequately direct all this amount of notes on various but mostly catastrophic topics.

He pointed out that people who are bombarded by such a number of indications about the outside can considerably affect people’s stability, so it is necessary to pay attention to this issue.

Silvia Gabriela Hernández Salinas said that traditional medicine in Oaxaca was achieved through grandmothers and grandparents, so it is important to systematize the knowledge they have left so that they are not lost.

In the native communities, it is necessary to attend to illnesses from the flu, to a heat stroke from being under the sun all day, also accommodating the baby is another of the needs, but for this, permission must be asked from the people in question, with the so that harmony prevails.

Attend to the body

The traditional doctor Hernández Salinas said that for her a key point in her work was in 2006 when an important social movement was registered in our state. Tense moments had an important impact on people’s lives, which also brought personal consequences.

Finally, he indicated that someone who feels bad physically, mentally, spiritually or individually, can go to a traditional doctor, to be able to find the balance in nature and in this way his own.