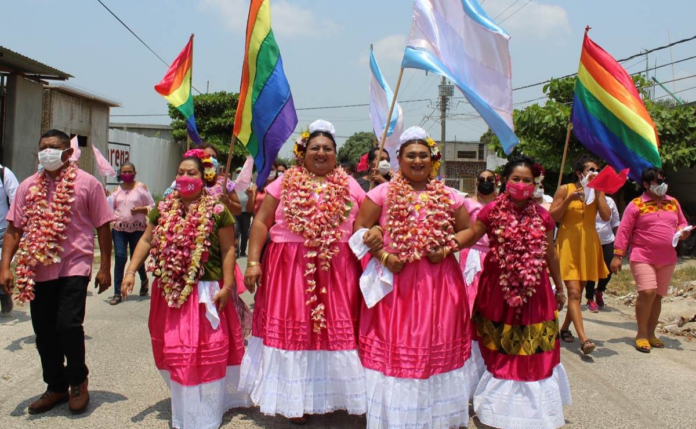 In these 2021 elections, it is the first time that 51 people who identify as LGBT + participate in Oaxaca

Juchitán Oaxaca.— After the Electoral Court of the State of Oaxaca (TEEO) reformed the guidelines on gender parity in favor of the lesbian, gay, bisexual, transsexual, transgender, transvestite, intersex, queer, Muxe population, and other terms related to the population of sexual diversity, as affirmative action for this sector, for the first time in Oaxaca 51 people who identify themselves as LGBTTTIQ + participate in the electoral contest.

From that universe, at least two formulas compete on the Isthmus of Tehuantepec for a popularly elected position, both for the Fuerza por México party: it is Joseline Sosa, who runs for the federal deputation for District 05, with head in Salina Cruz, and Kristhal Aquino, who is looking for the local deputation for the XX District, with head in Juchitán.

Under a not very kind sun, Joseline Sosa walks animatedly through the streets of Santa María Mixtequilla with a group of promoters and candidates of the Fuerza por México party.

Some residents greet her kindly, she is not unknown in the population, since her work for 18 years as a social activist for the defense and promotion of the human rights of the Muxe community in the region precedes her.

Joseline, 45, is proud to point out that she makes history, given that she is the first muxe-trans to be a candidate for a federal deputation for District 05 with head in Salina Cruz.

The candidate does not hide her emotion when asked about the importance of the participation of more than four mux candidates for a popularly elected position in a single electoral process.

For this activist who identifies as muxe-trans, the one who not only uses women’s clothing, but has also transformed her body, this process is an opportunity to send the message to society and the parties that the LGBTTTIQ + community in the region has members prepared to govern, to be part of a local and federal congress, and who are ready to achieve recognition of gender identity throughout the country.

“The muxe community is ready to propose laws from Congress that help transform the life of the trans community. I am excited to be part of the change in this country, a more inclusive country. The protection of society says a lot, we have the support of the people because they know that we have work, we are not improvised, we are prepared to govern ”, he comments after touring the houses of Santa María Mixtequilla.

Joseline also does not forget her origins in the Guichivere neighborhood, in Santo Domingo Tehuantepec, as well as her beginnings in activism at the hands of another Zapotec woman who has built social work in the region from the Mexfam organization: Beatriz Ramos. For this reason, when visiting house to house she repeats that she is known and that her proposals are not only for the muxe-trans community but also for the most vulnerable sectors, such as the elderly.

Kristhal Aquino is 34 years old and studying nursing. She is originally from Unión Hidalgo, along with her substitute Gabriela Montero, who has two degrees, one in gastronomy and the other in arts. During the most critical moments of the health contingency, Kristhal was in the front row fighting the pandemic in a clinic in San Cristóbal de las Casas, performing his social service; later he returned to Unión Hidalgo to offer his support to the sick.

Kristhal feels fortunate to be a candidate for the local council for Juchitán, a position she never sought but came to her because of the social work she has been doing for years in the region in the health area. She admits to being surprised for having achieved the candidacy without being a relative of a politician in the Isthmus or in the state.

“I am still surprised that they gave me the candidacy because I did not look for it like they fight in other parties. Here it was my work of years in favor of the communities in the matter of health that supported me. Here I am not offering citizens money or pantries, but rather proposals that help transform ways of life ”, he explains from his home before continuing his campaign for San Dionisio del Mar.

The candidate for the local council also presumes that she is the only one that has managed to enter high-risk communities due to political conflicts, such as Álvaro Obregón and the San Dionisio del Mar and San Francisco del Mar agencies in the ikoots area. Throughout her journey, she says with satisfaction, the rejection of being a muxe has not been present.

“The fear we had when we started was a rejection for being muxes. The surprise is that there was no such rejection, but cuddles, they prefer to give the vote to us, the girls, than to the same old men ”, reflects the first woman from Unión Hidalgo who aspires to a popular election position with a smile.

The approval of these guidelines is an affirmative action that seeks to “establish schemes that help to reverse inequality in the representation of vulnerable groups in Oaxaca in the electoral sphere,” according to IEEPCO.