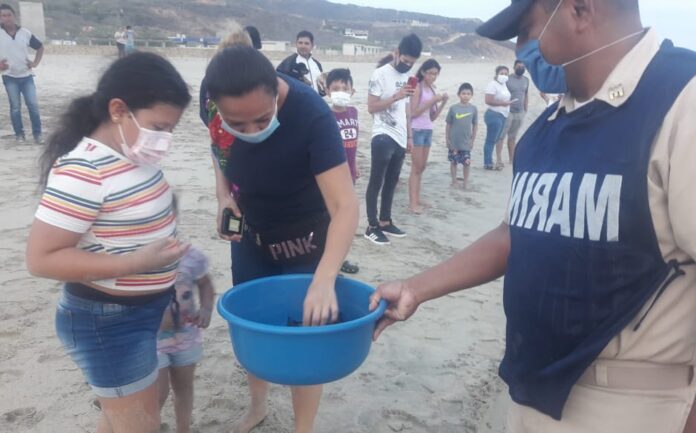 The release is carried out jointly to promote the importance of caring for marine species and conserving the state’s biodiversity.

In the company of families from Salina Cruz, personnel from the Secretariat of the Navy-Navy of Mexico (Semar), from the Twelfth Naval Zone, released 44 olive ridley turtle hatchlings, in the vicinity of Playa Abierta, in Oaxaca.

This type of joint release is carried out to promote in the community, and particularly in childhood, the importance of caring for marine species and conserving the biodiversity that exists in the state.

The authorities explained to the participants the importance of releasing the turtles, of the Lepidochelys Olivácea species,  in appropriate places and times to prevent them from being preyed upon by birds and to allow them to move away from the coast into deep waters, where they have a greater chance of survival.

The olive ridley turtle is a species that is considered in a “vulnerable” situation, according to the Official Mexican Standard (NOM) that establishes the specifications for the protection and recovery of the population of sea turtles, which includes various species and subspecies that are found in waters of federal jurisdiction.

They also mentioned that these reptiles come to the beaches only for the purpose of nesting.

Sailors travel the beaches permanently to retrieve the eggs from the nests that are at risk and take them to the artificial nest for sea turtles –or turtles–, where they are protected and artificially incubated for an approximate period of 50 days, after which hatchlings are born and are subsequently released.