Local health authorities reported that there are already 14 municipal presidents who have died in the entity during the pandemic.

Five mayors of the state of Oaxaca, in southern Mexico, died in the last 36 hours as a result of covid-19 and joined the nine municipal presidents who have died in the state during the pandemic for a total of 14, they reported this Tuesday local health authorities.

With 33,451 infections and 2,425 deaths, the state is in orange, high risk, of the epidemiological traffic light, but given the increase in cases and deaths in recent days, various sectors have asked the authorities for the entity to go red, maximum risk.

In addition, the health services of Oaxaca reported that of the 26 hospitals, which treat COVID-19, 17 are at 100% of their capacity , which makes January the most critical month of the pandemic in the state.

But despite this scenario, Efe found that mobility and activities in the Oaxacan capital, where more than half of the deaths have been recorded, continues to be high despite the restrictions.

Just this weekend, citizens reported crowds of people in the city of Oaxaca , the state capital, to the authorities, where popular dances were held in the tourist walkway, despite the emergency.

In addition, the mayors of the municipalities of Santos Reyes Nopala, Tehuantepec and Oaxaca de Juárez were singled out for allowing events or parties with their respective agglomerations in their demarcations.

The authorities pointed out that so far in 2021, hospital occupancy in the state capital has exceeded 100% at the Presidente Juárez Hospital, where its director, Jesús Gonzalo López Cruz, reported that in the last three weeks he has operated in more than 120% of its capacity . 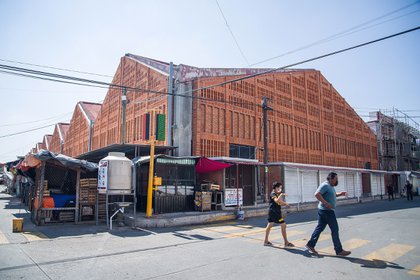 It has also become common to observe long lines of people who need to supply their tanks for their sick relatives in the medical oxygen stores of the city of Oaxaca (Photo: EFE)

In addition, outside the hospitals, it is common to observe floats and funeral personnel equipping themselves with protective suits to enter the emergency area to collect bodies and outside the waiting relatives.

It has also become common to see long lines of people in medical oxygen stores in the city of Oaxaca who need to supply their tanks for their sick relatives.

Regarding the vaccination plan of the Mexican Government, 23,400 doses of the vaccine against covid-19 destined for health personnel have arrived in the state, missing about 5,000 workers who are kept waiting in a state that has more than 4.1 million inhabitants , according to population data from the National Institute of Statistics, Geography and Informatics (Inegi).

Mexico has already exceeded 150,000 deaths from covid-19 with a pandemic unleashed that has overwhelmed the hospitals in the capital and has even infected President Andrés Manuel López Obrador, while the Government tries to combat it with a vaccination plan that advances at a slow pace .

After the Christmas and New Year holidays, the country has already far exceeded its previous peak in July and already accumulates 1.77 million patients after a week with daily records of infections and deaths.

Project to detect earthquakes and tsunamis in Zihuatanejo suspended

5 brothels shut down in downtown Queretaro