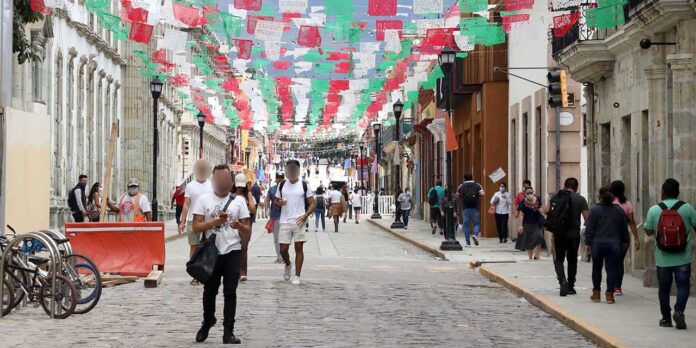 In the last hours, 347 new cases and 13 deaths were registered, while 1,058 patients have the disease in the active stage

The Oaxacan entity turns green in the epidemic risk traffic light at the Federal level, which will come into effect on October 4 to 17 of the same month. However, this does not mean that preventive measures should be relaxed or that the Covid-19 pandemic has ended, reported the Oaxaca Health Services (SSO).

Likewise, they specified that in recent days a sustained number of daily cases of the virus has been maintained, despite this, it is essential that the general population continue to use the mask correctly, since it can reduce the risk of infection by up to 90 percent. contagion, coupled with implementing hygiene actions that the agency has promoted since the start of the health emergency.

According to the most recent report, the Oaxacan territory begins the month of October with 77 thousand 209 accumulated positives of the coronavirus.

Meanwhile, on Thursday 76 thousand 862 were reported, which makes a difference of 347 new patients residents of 76 municipalities; With this current figure, the pandemic in Oaxaca is actively located in 122 municipalities with 1,058 patients.

Regarding the number of deaths, 13 deaths reported in the last 24 hours were identified, since this October 1 already added a total of 5 thousand 178 deaths due to SARS-CoV-2, with a greater prevalence in urban areas, mainly in Central Valleys.

According to official data, of the 76 municipalities with new cases during this cut, four are the ones with the highest incidence: Oaxaca de Juárez with 102, Santa Cruz Xoxocotlán with 27, in addition to Santa María Huatulco and Santa Lucía del Camino with 12 each. The rest reported fewer than nine infections.

Of the 470 beds that have been adapted for the care of the health emergency in the entity, 224 remain occupied until the close of this Friday, being the Isthmus, Central Valleys and Mixteca areas that concentrate the majority of this occupation, with 64.7 percent, 57.4 percent and 42.9 percent, respectively.

In this sense, the hospital network in the Oaxacan territory is at 52.3 percent in general, with six hospitals at 100 percent saturation and four new hospital admissions of patients who presented complications derived from the virus in the last day.

The institution pointed out that people with cardiometabolic diseases such as: diabetes, hypertension and morbid obesity, must have good control of these conditions, exercise daily, not neglect their medical treatment and their diet, to avoid complications in case of contracting the infection by SARS-CoV-2.