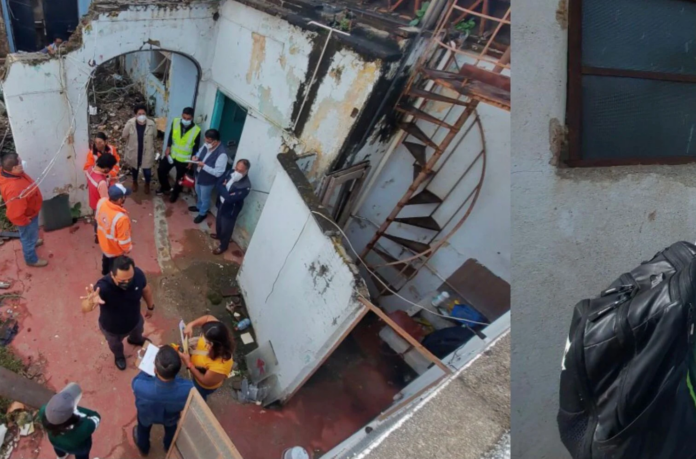 According to information from the municipality, there are less than 300 properties with different damages in the polygon of the Historic Center of the city of Oaxaca, so the supervision is carried out continuously

Oaxaca de Juárez.- The Subdirectorate of Civil Protection of the Oaxaca de Juárez city council, in coordination with the National Institute of Anthropology and History (INAH), carried out a supervisory tour of various cataloged properties in the city of Oaxaca in preparation for the second Drill National 2021.

One of these buildings is located on Calle de Murguía, in the Historic Center, which presents structural damage after the occurrence of disturbing phenomena in the Oaxacan state, such as the earthquake of September 7 and the constant high-intensity rains.

According to information from the municipality, there are over 300 properties with different damages in the area of ​​the Historic Center of the city of Oaxaca, so the supervision is carried out continuously.

The deputy director of Civil Protection, Manuel Aguirre Cuellar, announced that personnel from this agency in conjunction with the Executive Coordination of the Historic Center, the Subdirectorate of the Historic Center and the Heroic Fire Department of the State of Oaxaca, began inspection actions visual in various buildings in poor condition within the first quadrant of the city.

“We are carrying out supervision tasks in this building in order to assess the structural risks that it presents due to the intense rains and the earthquake that occurred in the Oaxacan state, with the objective of, on the one hand, minimizing the risks for the population. , and on the other, since this property will be the headquarters for the exercise of the Second National Drill 2021 to be held on September 19, “said the municipal official.

Meanwhile, the expert of the Section of Historical Monuments of the INAH Headquarters Oaxaca, Raúl Pacheco Pérez, highlighted the importance of coordinated work between agencies of the three levels of government, as he pointed out that it is essential to carry out these activities to protect physical and patrimonial integrity. of the inhabitants of the Historic Center.

The public servant added that the National Institute of Anthropology and History contemplates an initiative called the Program of Attention to Properties in Bad Condition (PAIME), which, he specified, is carried out permanently, intensifying in the period from May to October.

It is worth mentioning that after the earthquake of September 7, fallen fences of historic buildings were reported in the state capital.

Finally, the executive coordinator of the Historic Center, Alicia Bueno Velasco, stressed that according to the forecasts issued by the state and federal instances of Civil Protection, the presence of rains will continue until the month of November, hence the importance of maintaining actions coordinated between the three levels of government to guarantee the safety of those who pass through the city center.