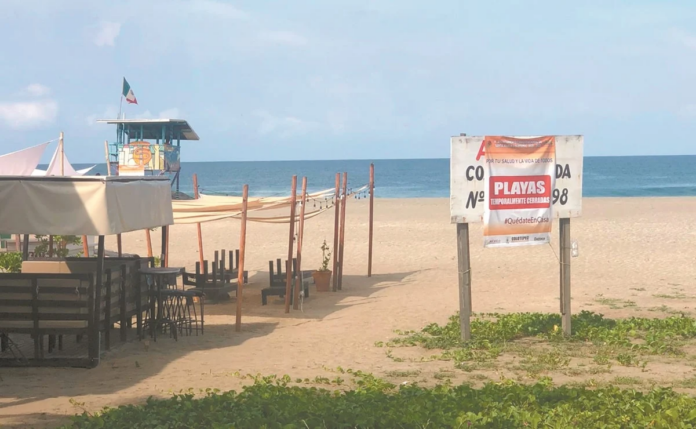 The decision was made today after an inter-municipal meeting in which the councilors of the entire region participated.

Oaxaca de Juárez.–  The municipal presidents of the Oaxaca Coast decreed that the entire region declares itself in the red phase of the epidemiological risk traffic light due to the increase in Covid-19 infections that are experienced in the entity, so they are hardened preventive measures, including the suspension of tourist services and the closure of all beaches.

Among the agreements reached, the municipal presidents decreed that all massive activity is prohibited from August 9 to 31; the use of mandatory face masks and the application of a fine of 500 pesos for those who violate this provision.

In addition, in that same period, Prohibition is declared, the provision of any tourist service and the closure of all beaches, including those of emblematic destinations of the entity such as Huatulco, Puerto Escondido, Zicatela and Mazunte are prohibited.

It was also ordered that private doctors must notify the 04 Costa Health Jurisdiction if a patient died and confirm that it was not due to Covid-19.

Another of the agreed measures was to request the collaboration of the National Guard and the Oaxaca State Police to carry out tours and operations, in order to ensure compliance with the sanitary measures.

Regarding public transport, it may operate with a 50% occupancy; It is also forbidden to carry out any religious activity or celebration.

The councilors reported that tours will be carried out by the security forces to publicize the traffic lights and the agreements made, which indicated that Romano agreed to take into account the life and health of the people, and appealing to the responsibility of the citizens.

These measures apply to all municipalities in the Costa region, with the exception of San Pedro Mixtepec, one of the two in which the tourist city of Puerto Escondido is located; However, since the end of July, Santa María Colotepec, the other municipality, had already decreed the closure of the main beaches of this destination, which are in its territory.

The decree of the maximum alert in the Coast of Oaxaca occurs just when the entity expected a strong economic recovery for the summer vacation period because according to the state Secretary of Tourism the arrival of 325 thousand visitors and an economic spill of a thousand were projected. 411 million pesos: 360 in the capital, 783 in Huatulco and 267 in Puerto Escondido.

According to the latest report from the Oaxaca Health Services (SSO), the Coast region accumulates a total of 447 active cases of the virus and with potential contagion of the 2,810 that Oaxaca records, which places it in third place at the level state, only below the Central Valleys and the Isthmus of Tehuantepec.

While in what refers to hospital occupancy, Covid de la Costa units are at 68.9% saturation, three percentage points below the state average of 71.4%.

The number of active cases currently facing Oaxaca is the highest that has been registered in the state since the health emergency began after the entity suffered in July an increase of 1000% in the number of patients facing the disease and therefore they represent a risk of contagion.