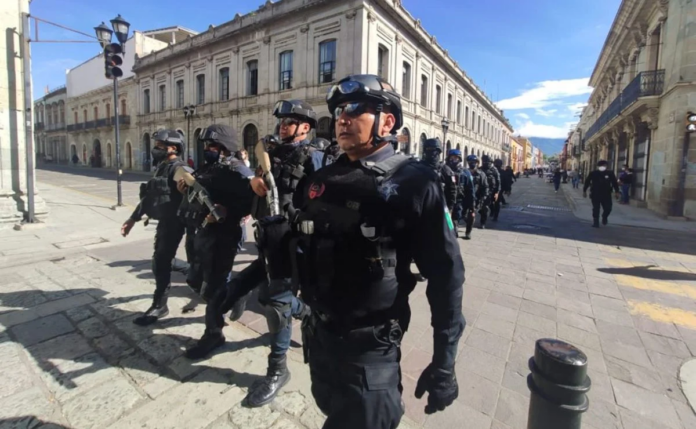 Despite this operation, EL UNIVERSAL found that the street vendors were installed, many of them store their merchandise in warehouses of the first square of the Historic Center, so the closure of the entrances has not prevented them from placing their stalls

Early this Thursday, personnel from the Government Directorate and the Directorate of Public Safety, Roads and Citizen Protection of the municipal government of Oaxaca de Juárez, deployed a security device to protect the entrances and intersections of the first square from the city, to avoid entry and installation of street vendors who do not have a permit.

Through a statement, the capital city council, headed by Oswaldo García Jarquín (Morena), pointed out that the head of the Directorate of Public Safety, Roads and Citizen Protection, Marcos Fredy Hernández López, announced that the elements of the Municipal Police They watch over 18 strategic points, as well as the Tourist Walk, the Zócalo and the Alameda de León.

Yesterday, councilmen of the city council made a call to the governor Alejandro Murat to solve the problem of street vendors that during the health emergency has worsened.

The foregoing is despite the fact that in statements to the media the state government has recalled that the problems arising from informal trade are the responsibility of municipal governments, to which support can be provided, only if requested.

For his part, Víctor Hugo Galicia Sarmiento, the deputy director for the Regulation of Public Highway Activity, explained that two checkpoints are located in the streets of Hidalgo and 20 de Noviembre, as well as in the street of Gurrión. , where municipal inspectors will verify that only those who have the permits to sell products on public roads can access the first square of the city.

A few days ago, an operation with fences and police surveillance had already been installed, to prevent the arrival of street vendors to the first square of the city; however, the vendors settled in despite the presence of the police.

Given this, the mayor Oswaldo García Jarquín did not rule out the use of public force to clear the streets of itinerant commerce. Meanwhile, the zócalo continues to be invaded by vendors, installed by groups that hold protests in the place.

Finally, Marcos Fredy Hernández López emphasized that this operational deployment is not only limited to the Zócalo, but encompasses the entire first square of the capital city, so that also through the Sub-Directorate of Traffic and Mobility a road system will be available to ensure adequate mobility in the area, so he asked citizens for their understanding and patience when driving on alternate roads.

Despite this operation, EL UNIVERSAL found that the street vendors have begun to settle, since many of them store their merchandise in warehouses of buildings in the first square of the Historic Center, so the closure of the entrances has not prevented them from placing their stalls .