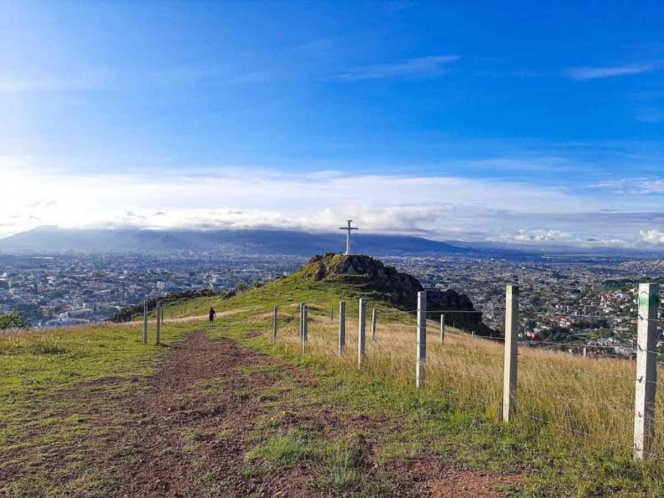 “We already wait too long for the government”

In an interview with EL UNIVERSAL, the activist Carlos Alberto Morales along with other people have managed to rehabilitate protected natural areas such as Cerro del Fortín and Cerro del Crestón

Oaxaca de Juárez. – Recovering natural spaces in Oaxaca where endemic species can inhabit is the task set more than three years ago by Carlos Alberto Morales, president of Colmillo Blanco, an association dedicated to the protection of animals and the preservation of the nature.

His first project was the creation of an oasis in Cerro del Fortín, in an area eroded by human presence, in addition to fires; however, the small work was destroyed by unknown persons. Carlos Alberto explains that the lack of water and food in the Fort caused the disappearance of some species.

The Cerro del Fortín is the highest point of the city that, in addition to housing the Guelaguetza Auditorium, where the “maximum celebration of the Oaxaqueños” is celebrated, has an 87-hectare park of trees, in which 95 species live of plants and 80 species of birds.

Since 2004, it is considered a protected natural area in the category of natural park and is under the administration of the State Institute of Ecology; in addition, it is part of the Sierra Madre del Sur.

In an interview with EL UNIVERSAL, the activist points out that after overcoming the destruction of the first oasis, together with other people, he managed to rehabilitate the area and build a second oasis, where the presence of nature is already evident.

Since his intervention in Cerro del Fortín, Carlos has been contacted by residents of other important hills in the capital such as Cerro del Crestón, where a few days ago a plantation of trees, pumpkins and native corn was carried out, which will serve as food for the birds that inhabit the area.

“Valles Centrales is no longer a productive place for migratory bird species and with these actions we hope to recover the presence of some species,” says the animal activist. The objective, he reiterates, is that the fruits and seeds obtained from sowing serve to nourish the animals, but also the earth and absorb moisture.

“It is a new proposal, based on a theory that we are applying, with the aim of regenerating the soil,” he says.

To achieve the recovery of natural areas, Carlos has used the solidarity and commitment to nature of the residents of the area and some of his acquaintances.

It details that the government of the entity has not taken interest in the natural recovery works headed by Colmillo Blanco, on the contrary, it specifies, the entire hill is subdivided; However, the inhabitants of the area are unaware of the intentions that weigh on the hill.

According to the Institute of Nature and Society of Oaxaca (INSO), within the protected natural area in Cerro del Crestón, the state government has a property of nine hectares, decreed since 1992 in the Planning Plan of the metropolitan area of Oaxaca; However, it has not received any attention from the authorities and is in danger of being swallowed up by the urban sprawl.

In recent days, White Fang protested with residents of El Crestón to demand that the machinery that has been “devastating” the nature of the place for several days, with the intention of building houses by means of the invasion of the protected area, in the part high of the hill.

The INSO limits that the rural area in Oaxaca has grown a thousand hectares per year, engulfing the natural areas. In El Crestón, he points out, it will reduce the water catchment capacity, since the greater the demand from the population, there will be more scarcity.

“We are going to reforest with our own means, we already wait too long for the government and they don’t do it,” says Carlos, who is convinced that tequio is a viable alternative to recover eroded soil.

Until now, Carlos and his wife take care of the two oases; However, little by little the people who pass through the area have joined the initiative, after seeing the drastic positive change that the area has had.

Recently, Carlos has been contacted by people who live in the Monte Albán area, where the neighbors are interested in undertaking a project similar to the one that exists in Cerro del Fortín and Cerro del Crestón; However, despite the fact that Carlos has already held meetings with the residents, the situation is different, since they are communal lands.

Even so, the nature lover trusts that the community members will join the project that will promote positive changes to the natural ecosystem of the most representative hills of the Oaxacan capital.