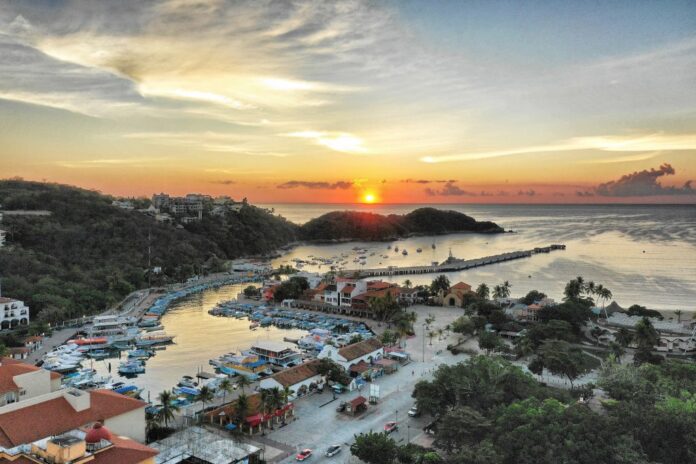 – It is the main bay in Huatulco, where the legend of the current most important beach tourist destination in Oaxaca also begins.

– Here is also the Cruise Ship Pier, where the ships of the large shipping lines arrive, such as Island Princess and Volendam among others of international prestige.

– Both the tourists who travel in these cruises descend from the ship, to know the place mainly in Huatulco, as well as hundreds of crew, who go out to live the experience of trying a typical Mexican food, as it is in the Restaurant “El Huayacán” , one of the oldest in this bay of Santa Cruz Huatulco.

It is the Bay of Santa Cruz Huatulco, the main one of the Bays of Huatulco, due to its location, but also because it is here the place where the legend of this tourist destination was born.

This is also one of the places that the locals feel the most like their own, since its main festivities take place on the beach of Santa Cruz Huatulco, by the way, the most urbanized of all the beaches that comprise the tourist complex.

– Every year a program of activities is carried out within the first Friday of Lent, where there are religious events (this was its beginning), such as a sport fishing tournament, cultural and folkloric programs, gastronomic samples and in each municipal administration, the activity programs, but in almost all of them, they always end with popular dances and burning of the castle and fireworks.

– Another of the traditional festivities, takes place on May 3 of each year, as it is the celebration of the Holy Cross, fundamental in the legend of the place, since all the legend derives from here, as one of these has been found pieces similar to where Jesus Christ was crucified, which was first identified as “El Madero”, having been informed after the evangelization, that it was “La Santa Cruz”, hence the name of this historic beach was adopted and Bay of Santa Cruz Huatulco.

In the place where the Holy Cross was found, a chapel was built, which is very significant and is located a few meters from the beach, so it is in great demand to celebrate masses, where important religious events are held, such as weddings, baptisms, fifteen years and mass on Sundays for local parishioners and tourists.

In this beach of Santa Cruz Huatulco, in addition to being the cruise ship dock, there is also a range of services such as the Santa Cruz marina, where all the private and collective boats are parked, as well as yachts, catamarans and everything. type of boats, having also a park with a cafeteria in the kiosk, banks, hotels, silver shops, real estate, travel agencies, coffee shops and many other services.

If you asked us what place to eat we recommend, which is one of the most frequently asked questions, when you want to eat by the sea and appreciate the Pacific Ocean, while tasting delicious seafood and typical Oaxacan dishes, such as the classic tlayuda that It identifies us throughout the world, without a doubt we tell you that it is “El Huayacán”, one of the most representative restaurants of typical Oaxacan and Mexican food and the most basic of international food. Lately, in this place, they have made the drink “crazy coconut” very fashionable, based on a natural coconut with a house recipe, which you will enjoy and will not be able to forget, due to its delicious flavor and freshness that it offers you. drink that is becoming much in demand in this place. But also the hot seafood, breaded shrimp, black mole,

So when you visit Huatulco remember to go to the beach of Santa Cruz Huatulco, so that you know where the legend began and if you are going to have a drink or are going to eat, in the Restaurant “El Huayacán”, you will be attended by a family of natives who For several decades, they have been professionalizing in providing quality care, without losing that good humor and mischief of the coastal people, which so much pleases the entire national and international public.

We invite you to visit Huatulco at any time of the year and by the way on the beach of Santa Cruz, the waves are totally calm, which gives you a lot of security for you and your whole family, for something the ancestors, their first human settlements them they had in this place, precisely because of the gentle waves and its fine sand.