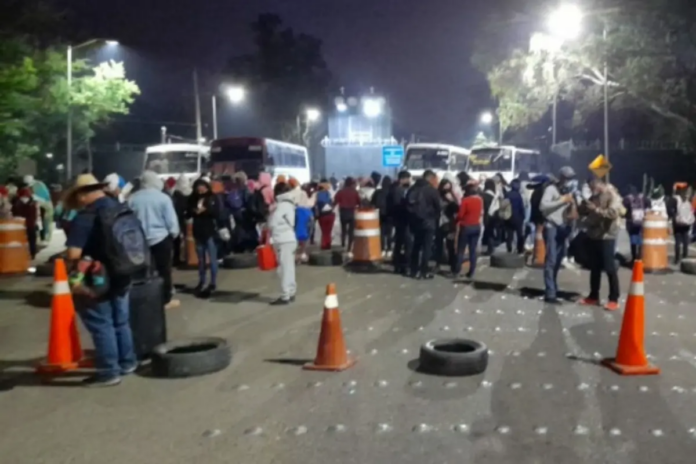 This group identifies themselves as students of the normalista schools of Oaxaca, who for two weeks have been holding a series of protests in the state capital to demand the hiring, without conditions, of the entire generation of graduates this 2021, among others requirements.

The irruption of violence in the facilities of the Benito Juárez International Airport in Oaxaca maintains the suspension of flights within Mexico and the United States.

The group, which acts as a guerrilla cell, is holding hostage the passengers who arrived in the city on Sunday afternoon.

So far the authorities have sought to negotiate the release of the hostages, without the group giving in.

According to Juan Pablo García-Luna, administrator of the Xoxocotlán International Airport, this blockade has caused the cancellation of seven flights of the companies Aeroméxico, Volaris, Viva Aerobus, and United; as well as the delay of others.

Of these cancellations, five are for flights that were scheduled for yesterday, with destinations such as Monterrey-Oaxaca-Monterrey and Mexico City-Oaxaca-Mexico City, for which the airlines have issued messages such as: “Due to the blockages presented at the access to the airport, the following flights are canceled ”, as an explanation to the passengers.

While this Monday, two other flights have already been canceled, one from Volaris and one from United. The first of them left the city of Oaxaca in the direction of Tijuana, Baja California, while the second would arrive in the Oaxacan capital from Houston, Texas, United States.

In addition, this Monday the cancellation of flights remains, at least five, after the arrival and departure of aircraft from Mexico City and cities in the United States has been postponed.

Among the delayed flights this Monday are four from Aeroméxico, some even add almost seven hours of delay to take off from Oaxaca to Mexico City, and one from American, which left at 10:30 in the morning, heading to Dallas, Texas.

Who is this group?

They are supposed students from teaching schools.

In Oaxaca there are 11 normalista schools, with a school staff that exceeds 4 thousand students.

However, this group, about 100 young people who are always hooded, operates encouraged by some leaders of the teachers’ union such as Wilbert Santiago.

They have sued the government for the delivery of luxury Sprinter trucks, inclusion to the teacher’s payroll as soon as they leave school, and automatic bases for graduates, in addition to arguing that the normal ones will close.

The federal governments, through the Secretariat of Public Education (SEP) and the state of Oaxaca, have responded that Sprinter trucks are a demand that they are, as a rule, unable to meet.

But as regards the conservation of the normalista schools, they will continue to operate with financial backing from the authorities.

They have also released the list of all the hires  that do not present a delay and that they have done in a timely manner.

Even so, they continue to raise a flag that they occupy to attack strategic facilities such as the Oaxaca airport.

What does this group want?

Based on the manuals of guerrilla warfare, the actions of this group do not seek to respond to any demand, but rather to destabilize and lead to deaths.

The escalation of violent actions has a route that considers the police incursion, to denounce repression and, where appropriate, to obtain one or more victims.

A great majority of members of the teachers’ union in Oaxaca are related to López Obrador’s political party “MORENA” and have questioned the ways of this group.

Both López Obrador and Alejandro Murat, the governor of Oaxaca, have held constant meetings with the official leadership recognized by the majority of the magisterium.

This relationship is the one that exacerbates radical groups within the union that also had economic control in the definition of positions and new entries in the normal ones.