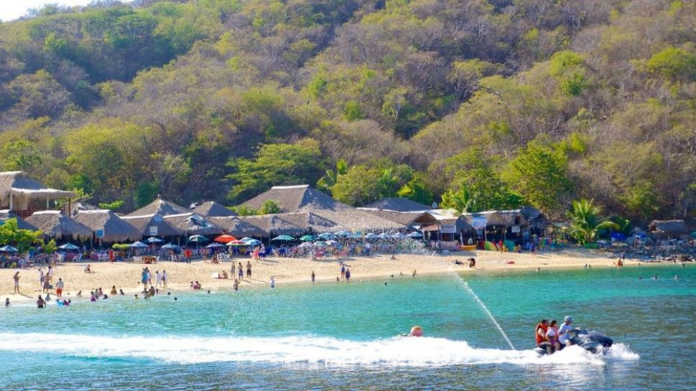 According to the Huatulco authorities, the establishments may open at Easter applying all sanitary measures to avoid COVID-19 infections.

On the eve of the Easter holiday season, municipal authorities of Santa María Huatulco, Oaxaca, reported that from March 30 to April 5, tourist services will operate at 50% of their capacity.

According to the authorities, the establishments will be able to open applying all the sanitary measures to avoid contagion by COVID-19, and guarantee the health of all visitors.

The municipal authorities are going to allow hotels and restaurants to operate at 50% of their capacity for this Easter season.

They also pointed out that crowds of people will not be allowed, so activities such as concerts, sporting, and religious events (such as the celebration of the Fourth Friday of Lent) are suspended.

They also called on the population to maintain and respect sanitary measures to avoid more infections by COVID-19.

In Santa María Huatulco, 479 confirmed cases of COVID-19 have been registered until Friday, in addition to 33 deaths related to this disease.

The Ministry of Health released this Friday the update of the COVID-19 epidemiological traffic light where Oaxaca remains at an orange traffic light.

Beaches in Mexico will be closed at Easter

Before Easter, some municipal authorities in entities of the country have announced that some beaches will be closed to avoid COVID-19 infections.

The Sinaloa authorities are preparing an operation to close the Navolato beaches, including Altata, El Tambor, Nuevo Altata, and Las Águilas, where vehicles will not be allowed to enter the boardwalk either.

In addition, elements of Civil Protection and the local Police will evict people who remain on the Altata boardwalk after 10 pm.

Despite this, the restaurants located in front of the beaches will be able to operate at 80% of their capacity with indoor service.

Some beaches in Baja California Sur will also not be allowed to accommodate people during the Easter holidays, according to the head of the state’s Secretary of Health, Víctor George Flores, local media reported.

The official indicated that they will seek to establish a strategy in coordination with state authorities to prevent people from leaving their homes and thereby increase the number of COVID-19 infections.

This was confirmed by the mayor of La Paz, Rubén Muñoz Álvarez, who stressed that the beaches will be closed from April 1 to 4, although the holidays begin on Sunday, March 28, and end the following Sunday, April 4.